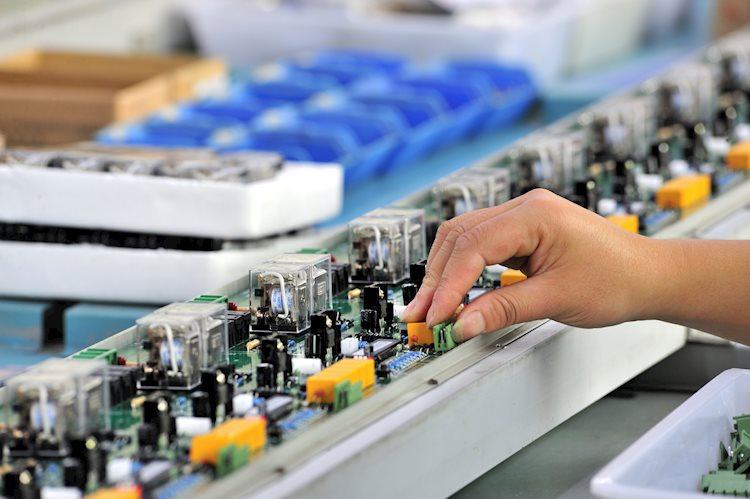 Overview: Despite better than expected Chinese data, and last week’s investor-friendly developments, Asia Pacific equities were mixed. Australia led the advancing bourses with a 1.6% gain, its largest for the year despite the government revising down growth and wages. China, Taiwan, and Indian markets also moved higher. Europe’s Dow Jones Stoxx 600 is extending its advance for the fourth consecutive session, despite disappointing flash PMIs to reach new record highs. US shares are trading to the upside, and the SP 500 has a three-day rally in tow. Benchmark 10-year yields have mostly edged lower, though the Australian yield tumbled 10 bp as the government is reluctant to use fiscal policy to support the economy. The US 10-year yield is slightly firmer, around 1.83%. The dollar is trading with a heavier bias against the major currencies, emerging market currencies are mixed, with the Turkish lira, Chinese yuan, and Mexican peso among the decliners. The South African rand and Russian rouble are leading the advancers with around 0.4% and 0.25% gain, respectively. Gold and oil prices are little changed.

China’s November industrial production and retail sales rebounded. Industrial output rose 6.2% from 4.7% in October and expectations for a 5% gain. Retail sales rose 8% from 7.2%. First, many are skeptical of Chinese data in general and especially if it posts gains when the economy is seen slowing. Second, the strength is dismissed by others on ideas it was flattered by quarter-end seasonal quirks and Singles’ Day. However, we are a bit less dismissive and see other potential signs that official efforts to stabilize the economy may be working. China’s infrastructure push appears to be yielding results. That seems to be what the higher construction material prices, like cement, steel rebar, and construction aggregate.

It is hard to untangle how much of the apparent slowdown of the Chinese economy is a function of its own internal dynamics and how much is due to trade tensions. In terms of a reduced volume of exports to the US, there is the kernel of truth in claims that China paid for the tariffs. It paid for the tariffs in terms of quantities; it sold fewer goods. Importers paid the tariff, of course, but the impact on overall imported prices, and inflation more broadly, was minimal. Ironically, it may be China’s required purchases of US foodstuffs and other goods that may help underpin US prices going forward.

The devil may be in the details, but in this holiday season, the importance of the US-China agreement is to be found in the big picture that the trade tensions have not gotten worse. Each seems to be determined to continue to frustrate the ambitions of the other. The actual tariff relief for US businesses and consumers is minor. China has long offered to step up its purchases of US goods to reduce the bilateral imbalance. Indeed reducing the US deficit with China will prove considerably easier than improving the overall external position with a change in US savings and investment. US reports claim that the agreement includes a $200 bln increase in exports to China, of which $40-$50 bln will be agriculture products, stretches credence. In 2017, before the tariff conflict began, US goods exports to China were less than $130 bln, of which agriculture was about $24 bln. From 2007-2017, US exports to China rose by roughly 85% compared while exports to the rest of the world by a little more than 20%.

Australia’s Treasurer Frydenberg slashed the projected budget surplus to A$5 bln from A$7.1 bln projection in April amid signs of weaker growth. Growth in the year through June 2020 was cut to 2.25% from 2.75%. Forecasts for wage growth were also cut. The key takeaway is that the Australian government does not intend to use fiscal stimulus to support the economy as others, such as New Zealand and Japan, intend. Monetary policy will still have to bear the burden, and this will increase speculation that the Reserve Bank of Australia may introduce an asset purchases program next year.

The dollar is has been confined to about a quarter of a yen below JPY109.50, where a roughly $960 mln option is struck that expires today. Another option for almost $800 mln is struck at JPY109.00 and also will be cut. The pre-weekend high was set near JPY109.70. After rejecting the $0.6940 area before the weekend and the bearish shooting star candlestick, there was no follow-through selling of the Australian dollar today. It, too, is little changed, unable to resurface above $0.6900, and finding support near $0.6870. The offshore yuan (CNH) sold off ahead of the weekend and strengthened today, leaving the greenback straddling CNH7.0. The onshore yuan closed firmed before the weekend and had some catch-up to do today. The dollar is up about 0.4% to resurface above CNY7.0. It rose above the previous session’s high for the first time in nine sessions.

The eurozone flash manufacturing PMI disappointed, but the resilience of the service PMI may have helped the euro shrug off the news. The aggregate manufacturing PMI fell to 45.9 from 46.9. Economists had expected a small gain. The German component fell to a new two-month low (43.4) from 44.1. The French reading also fell (50.3 from 51.7). Services, which are seen to be a better measure of domestic demand, was stronger than expected at 52.4 (from 51.9). The German service PMI rose to 52.0 from 51.7, a new four-month high. The French reading rose to 52.4 from 52.2. The EMU composite was steady at 50.6.

The UK’s flash PMI was disappointed but can be seen as dated given that the election results lifted the uncertainty. The composite slumped to 48.5 from 49.3 as both manufacturing (47.4 vs. 48.9), and service (49.0 vs. 49.3) components fell. The combination of the Brexit resolution and the fiscal stimulus that Prime Minister Johnson promised is expected to lift the UK economy.

The euro is trading quietly at the lower end of its pre-weekend range, have been turned back from the approach to $1.12. Support was found near $1.1120. Initial resistance has been encountered by $1.1150, where the 200-day moving average is found, and a 1.3 bln expiring option has been struck. There is another option at $1.1125 for about 930 mln euro also expires today. Sterling’s attempt to push above $1.34 met strong selling pressure. An option for about GBP810 mln placed there will expire today. Another option at $1.3350 for about GBP440 mln will also expire. Lastly, an option at $1.33 for around GBP820 mln looks safe today.

Mexico’s Senate passed a revised NAFTA 2.0 107-1 last week. It is expected to pass the US House Ways and Means Committee on Tuesday and the full House on Thursday. One contentious issue was the inspection of Mexican labor conditions by US nationals, which was rejected by Mexico as an affront to its sovereignty. However, Mexico’s chief negotiator Seade has formally objected to the US congressional proposal to create five new labor attaches to monitor implementation. This apparently was not included in the agreement signed last week in Mexico City. Foreign officials must be recognized by Mexican authorities to perform their duties. We expect a compromise will be found.

Argentina is set to raise export taxes to raise revenue. It will be raised from four pesos for a dollar to 9%. There is some confusion over the impact on include agriculture products, like soy, which accounts for around a third of the country’s exports. Soybeans were not specified. There are some reports that suggest soy, corn, and wheat may return to the previous tax of 12%, but because soybeans and processed soy have an 18% surcharge, it is possible than an overall 30% export tax is levied.

The US reports the December Empire State manufacturing survey and the flash PMI. The Treasury’s International Capital report (TIC) for October will be released late in the session. Recall that the PMI strength contrasted with the ISM weakness, and the conflicting signals are still evident in the GDP trackers, where the Atlanta Fed’s model projects 2% growth here in Q4 and the New York Fed’s model is for 0.7%. Canada reports its version of the TIC data and November’s existing home sales.  Neither typically moves the capital markets.

After several attempts, the CAD1.3150 level, which is a (61.8%) retracement of the rally from late-October lows, is yielding to the dollar selling pressure. The greenback has tested the CAD1.3130 area in the European morning and leaving the intraday technical readings stretched before the start of North American activity. The next target is near CAD1.3100. The US dollar briefly traded below MXN19.00 before the weekend for the first time since late July. It is hovering around little changed levels and meets resistance near MXN19.10. The Dollar Index is softer but within the pre-weekend range, which itself was inside the wide 96.50-97.50 range from December 12.