Global Affairs briefing papers released by a House of Commons committee show that Canada’s professional foreign service has been warning politicians that it’s dangerous for Ottawa to get too close to China.

Seven documents were released by a Commons committee on Canada-China relations that was formed in January after opposition parties united to outvote the Liberal minority, which opposed the creation of such a committee.

The last of the documents is described in a cover letter by Global Affairs’ top civil servant as “a concise diagnostic for the incoming minister of foreign affairs to set the stage for strategic advice on how to approach relations with China”. Deputy Minister Marta Morgan writes that the paper distills the new approach to China, and that “Minister Champagne has called for a new framework for Canada-China relations.”

That paper, written in October 2019, warns that “while Canada has long framed its China policy through the lens of economic opportunity, it now needs to take account of Beijing’s long-term strategic challenge to Canada’s interests and values.” 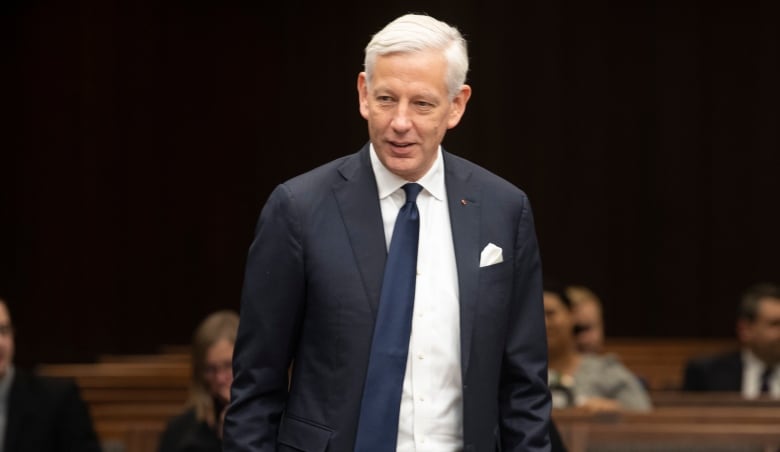 The paper cites the Asian Infrastructure Investment Bank as an example of how Beijing “promotes perspectives on governance, economic security and human rights that diverge in fundamental ways from Canada’s.”

The Trudeau government has bought a stake in the bank, committing to give it $256 million over five years.

CBC News asked Chinese Ambassador Cong Peiwu about the committee’s hearings on China when he spoke at a conference in Ottawa on Tuesday afternoon. “For the committee itself, actually it’s an internal affair of Canada so we don’t want to say too much about that,” he said. “But we do hope that it will be a platform that will contribute constructive opinions for the growth of our bilateral relationship, rather than making those noises trying to disrupt the sound and steady growth of our relationship.”

Ambassador Cong said it was a mistake to view China as a strategic rival.

“We don’t want to be the rival of any country. For us, we pursue a foreign policy of peace and independence, so we would like to develop friendly relations with any country that would like to do the same with China.”

The Harper government showed comparatively little interest in building close ties with China. Harper visited China three times during his decade in office, and signed a Foreign Investment Protection Agreement with the country in 2012. But he also barred Chinese companies from investing in Canada’s resource industries and generally kept government-to-government contacts at a relatively low level. The timeline of visits released by GAC begins in 2015, Stephen Harper’s last year in office, and shows no ministerial-level visits to China that year.

2016 saw 13 ministerial visits to China, including a week-long visit by Trudeau himself. Finance Minister Bill Morneau was in the country three times that year.

Then came the arrest of Huawei executive Meng Wanzhou in Vancouver on Dec. 1, 2018, and shortly afterward, the detention in China of Canadians Michael Kovrig and Michael Spavor. In 2019, there was only one visit by Small Business Minister Mary Ng, who spent two days in Dalian in July.

The Global Affairs analysis says that engagement with China has not produced desired outcomes.

“Despite recent developments (one formal bilateral meeting between foreign ministers, and the respective nomination of Ambassadors), the Chinese government’s position remains unchanged” when it comes to the detentions of Canadian citizens, the documents say.

It says “Canada is at a fundamental juncture in its relationship with the PRC” and should seek to work around China rather than to work with it:

“As the PRC [People’s Republic of China] continues to bolster its assertive foreign policy demeanour, Canada must promote and defend its values in close partnership with like-minded allies and coalitions.

“The crisis has demonstrated Beijing’s readiness and ability to use aggressive economic and political levers to punish Canada (a pattern observed in China’s other bilateral relationships), and to propagate norms of international relations inimical to Canada’s interests.”

“Canada-China” says that China exerts influence not merely to advance its commercial interests, but also to promote its authoritarian model of government. It describes the Asian Infrastructure Investment Bank and the Belt and Road Initiative as the means of pushing that model on the developing world.

“China has utilized these alternative forums to leverage its economic prowess to gain regional influence and export its model of governance around the world.

Former CSIS director Richard Fadden warned in a CBC television interview in 2010 that China was seeking to infiltrate and influence Canadian institutions, including provincial and local governments and universities.

In March 2018, CSIS published a paper entitled “Rethinking Security: China in the Age of Strategic Rivalry”. The report used New Zealand as an example of a country that had allowed its public life to be penetrated and influenced by China to an alarming degree.

There were some tough questions from Conservative and New Democrat MPs for Canada’s ambassador to China, Dominic Barton, when he appeared before the Commons committee on February 5.

Barton demurred when pressed to state whether those projects violate international law, saying he did not know the Canadian government’s position.

He also told the committee he had not been able to visit detainee Huseyin Celil, jailed in China for the past 13 years, because Celil is not Canadian. In fact, Celil is a Canadian citizen, although the government of China does not recognize that fact.

One of Ambassador Barton’s comments before the committee was criticized by a China expert and former Canadian diplomat as an echo of Chinese propaganda.

Barton said of the Chinese people that “they place an importance on the values of collectivism and harmony, owing to a Confucian heritage. Understanding the extent to which China values unity and the needs of society at large, rather than freedom of individual choice … we just have to understand that.”

Charles Burton, a former Canadian diplomat in Beijing who now teaches on China’s government at Brock University, told the committee this week that he was “taken aback” to read those comments.

“Let me point out that this assertion by our ambassador is consistent with the official propaganda of the Chinese Communist Party under Chairman Xi Jinping,” he said. “The Chinese Communist Party upholds its legitimacy by claiming that China’s traditional culture demands, in this modern age, a non-democratic single party of autocratic rule. I could not disagree more with this interpretation.”

The Global Affairs analysis is markedly negative about trade with China. “Chinese discriminatory trade policies against Canada have contributed to an increase in Canada’s trade deficit with China (for the first half of 2019) as some Canadian exports have been restricted and Chinese imports have continued unabated.”

“Canadian commercial interests that are dependent on the Chinese market are vulnerable to sudden and arbitrary trade disruptions,” it warns. “Canadian exporters and investors continue to experience problems.”

In contrast, Ambassador Barton made no secret of the fact that he remains bullish on China as a business partner, telling the committee he “would love to talk more about promoting trade and investment. I probably should shut up and move on, but I’m very excited by the opportunity we have on many fronts.”

Burton said that kind of talk sends the wrong message to a country that is holding Canadian citizens arbitrarily.

“The signal is that hostage diplomacy and the imposition of arbitrary trade sanctions on Canada is a policy that works,” he said.

Philip Calvert, who served ten years as a Canadian diplomat in Beijing and today is a senior fellow at the University of Alberta’s China Institute, told the committee that Canada should react more vigorously to the detentions.

“Canada could play a leading role in crafting a collective response to China’s policy of taking hostages,” he said. “China has engaged in this practice with virtual impunity for some time, and has arbitrarily imprisoned citizens of a number of countries.”

Calvert said that Canada should consider using trade measures in concert with other countries that have seen their citizens taken as bargaining chips.

He also questioned the wisdom of trying to get the relationship back to where it was prior to the detention of Meng Wanzhou.

“I don’t think we can go back to the way things were before,” said Calvert. “This case has done significant harm to China’s image in Canada, and has led to a fundamental shift in Canadian attitudes.”