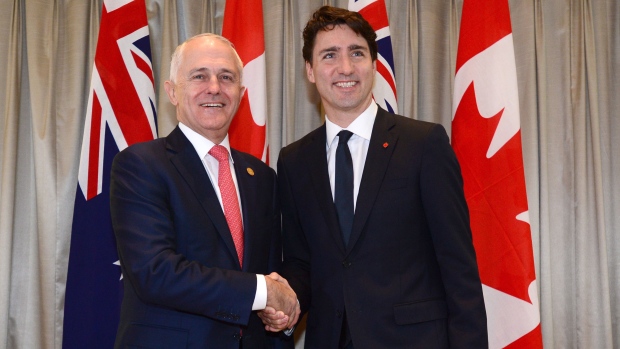 In the book, titled A Bigger Picture, Turnbull spends one chapter providing a behind-the-scenes look into the trade negotiations that resulted in the CPTPP, a trade deal between Australia, Brunei, Canada, Chile, Japan, Malaysia, Mexico, New Zealand, Peru, Singapore, and Vietnam. The deal was supposed to include the United States as well, but U.S. President Donald Trump pulled out of the deal early in his presidency— forcing the remaining countries to work to salvage the partnership amongst themselves.

Turnbull wrote that in the final moments before the expected signing of the finalized CPTPP — as cameras waited to record the event at the November 2017 APEC meeting in Vietnam — he received word that Trudeau was pulling out of the deal.

“I was extremely disappointed in Justin…And it wasn’t as though we hadn’t bent over backwards for Justin, even agreeing to rename [the Trans-Pacific Partnership] the ‘Comprehensive Progressive Trans Pacific Partnership,'” Turnbull wrote.

“Like any young, good-looking leader, he was always liable to be described by his critics as a lightweight. But I’d found him more thoughtful than some of his reviews suggested. This last minute backflip looked flaky. Had I misjudged him?”

CTV News reached out to the prime minister’s office for comment, but were referred instead to International Trade Minister Mary Ng’s office. In an emailed statement to CTV News on Tuesday night, Ng’s spokesperson Eleanore Catenaro said that “from the beginning, [Canada] said that we would only agree to a deal that is in Canada’s best interests.”

“At the time, we weren’t ready to accept the deal on the table at the 2017 APEC summit,” Catenaro said.

Turnbull said that immediately after receiving word Trudeau was backing out of the deal, Australia had a pre-scheduled bilateral meeting with Canada. Turnbull said that as Trudeau arrived for the meeting, he asked the then-Australian prime minister what Turnbull thought of his socks.

“‘Justin,’ I said, ‘we’re not here to talk about your socks,'” Turnbull wrote.

Turnbull said that during the exchange, he warned Trudeau that he had “humiliated” both the Japanese and Vietnamese prime ministers.

“I felt like a grumpy old man, but I had to be frank,” Turnbull said in the autobiography.

“I told him this flakiness was going to do a lot of damage to Canada’s standing with Japan. Even some of the non-TPP leaders had been shocked. It wasn’t respectful, and it certainly wasn’t the way you do business with the [Association of Southeast Asian Nations].”

In addition to his scathing rendition of the negotiations, Turnbull also described then-Mexican president Enrique Peña Nieto’s assertion that Canada could have been acquiescing to a fear of Trump.

“Enrique suspected Justin may have been worried about offending Trump,” Turnbull wrote.

“I said to him that might be so, but the best way to deal with Donald was to be up-front, frank and stand your ground; there was no other way to win his respect.”

Turnbull detailed the continued negotiations, explaining that the countries continued to push for a deal over the following months as Canada expressed various concerns about the CPTPP. He said that it was in late January 2018 that he and Japanese Prime Minister Shinzo Abe decided to give Canada an ultimatum.

“With the encouragement of our trade negotiators, the Japanese showed two draft press releases to the Canadian. One was for TPP-11, the other for TPP-10. ‘Right now we are pretty indifferent to which one we issue.’ It worked,” Turnbull wrote.

Just over a month later, the trade deal was signed.

However, Catenaro told a slightly different story of the negotiations — indicating that it wasn’t so much an ultimatum, but the gains in key areas that resulted in a deal.

“With efforts led by the Prime Minister, we kept working on CPTPP negotiations – and we secured important gains on culture, an improved arrangement on autos with Japan, and the suspension of many concerning intellectual property provisions,” Catenaro said.