On August 19th the Government of Canada officially proclaimed that Foot and Mouth had been eliminated in Canada and from that date forward all quarantine restrictions imposed to control and eliminate the disease had been lifted. Approximately six months after the first outbreak on the Regina Plains and about three and a half months after the last isolated outbreak at Weyburn, Sask., the disease was officially at an end. With the proclamation there came to a close a period in which the Health of Animals Branch carried on an epic fight in disease control and at the same time overcame the handicaps of cold winter months and the muck and mire of the spring thaw. The job which was done without fanfare will long stand as a major undertaking accomplished efficiently and thoroughly. 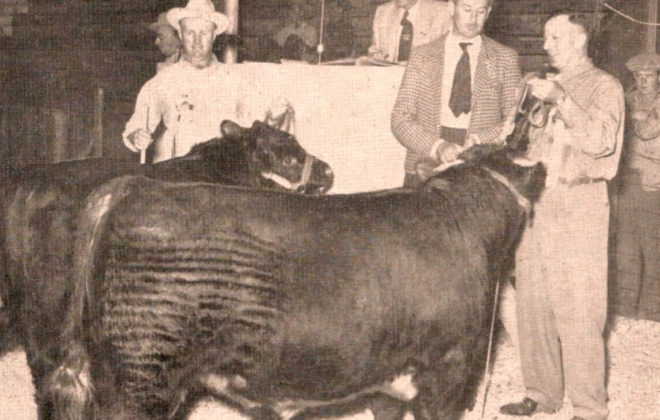 History: Many are the hearts

The disease is over but the marketing problems which it precipitated are still present to plague both the government and the cattlemen. Provincial embargoes, imposed during the early stages of the disease, have long since been lifted and now that quarantine restrictions in Saskatchewan are removed the domestic trade in both cattle and beef can return to normalcy. Although Canada is not overburdened with cattle numbers — hardly enough to feed her own people if normal domestic beef consumption were to return — there is still the problem of seasonal fluctuation in marketings and the U.S. sanitary embargo still remains.

When the disease broke the Government acted quickly to negotiate the four-nation beef arrangement whereby Canada would send surplus beef to the United Kingdom to replace beef which was to be delivered there under contract by New Zealand. The latter country would send its beef to the United States. It is understood the volume of beef the United Kingdom would take would be approximately 60 million pounds. Whether or not this arrangement will prove to be a wise one is reserved for future discussion.

It may be argued that a sale of the Canadian surplus to the United Kingdom on a barter basis and upon long term credit in the long run would have been the wiser course instead of diverting large quantities of plain New Zealand beef to Canada’s best and only profitable export market. (Already New Zealand deliveries account for six to eight per cent of the plain quality beef available to U.S. consumers and the prospect of large numbers of plain cattle from Mexico have resulted in a drop of from $8 to $10.00 per cwt. in that grade of live cattle in the U.S. which in turn may depress the price of better quality cattle later on when Canada may again export to the U.S.)

However, this trading arrangement enabled the Canadian government to initiate a floor price policy without too much delay based on $25 per cwt in Toronto for good steers and this saved the feeding industry from bankruptcy during the late spring months. Severe capital losses in many cases resulted nevertheless.

Although the floor price is indicated as being on live cattle, in effect the Prices Support Board purchases beef from inspected packing plants at prices which translate into the announced floor price for live cattle. The Board relies on the packer paying the producer the floor price. Needless to say this is not always done because the policy does not provide for the Board to purchase all beef which is surplus. As a result the market price for good fat range cows is $12.00 per cwt whereas the floor price beef equivalent, assuming the packer has a quota with the Board, calls for a market price of $17 to $18 per cwt.

Dissatisfaction with the operation of the present policy is evident among cattlemen. They see a policy which does not provide for all of the industry’s surplus and one which because of limited quotas to packers encourages lower price quotations on live cattle. They contend that the only effective floor policy, if the floor price is to be on live cattle, would be one where a government buyer actually buys live cattle for Board account at pre-determined live cattle prices.

The minister has counselled producers to hold back their marketings but it has been pointed out that in many if not all ranch operations this is not possible in the fall period. The only operators who can hold back marketings to the abattoirs are the cattle feeders who purchase from the cattle producers. And unless the government policy is projected as to price, to and through next spring cattle feeders are not inclined to make purchases now except at speculative prices.

Instead it is suggested that the government should announce a floor price policy based on but lower than a weekly average of prices for good steers at Chicago less transportation and other shipping costs from important Canadian central markets and this price should be adjusted weekly until the U.S. market is again available. It is thought if this policy would be laid down now cattle feeders would appraise market possibilities for next spring in the United States and make their purchases accordingly.

A floor price policy tied to prices in Canada’s export market would inspire confidence and bring the feeder buyer into the market now when his buying will absorb heavy fall marketings in Western Canada and spread supplies through the first half of 1953 when they may be needed right here in Canada.