Editor’s Note: Morning Trade is a free version of POLITICO Pro Trade’s morning newsletter, which is delivered to our subscribers each morning at 6 a.m. The POLITICO Pro platform combines the news you need with tools you can use to take action on the day’s biggest stories. Act on the news with POLITICO Pro.

— U.S. and U.K. officials start round two of trade talks today, as they pursue a “hugely ambitious” goal of signing a deal before the November U.S. election. But some trade experts say it’s likely only a partial deal could be reached by then, given the number of tough issues like agriculture that need to be resolved for a full-fledged agreement.

— President Donald Trump has been quiet on Hong Kong since he announced last month that he was beginning the process to end the former British colony’s special treatment. And it may stay quiet until China officially passes the national security law, which could be in the coming weeks or months.

— China hawks on Capitol Hill are pushing to keep a Chinese company that makes airport boarding bridges from getting back into the American market.

Get the free POLITICO news app for the critical updates you need. Breaking news, analysis, videos, and podcasts, right at your fingertips. Download for iOS and Android.

IT’S MONDAY, JUNE 15! Welcome to Morning Trade, where your hosts hope everyone had a great weekend and is full of news tips to start off our week. Let us know: [email protected] or [email protected].

SECOND ROUND OF U.S.-U.K. TALKS KICK OFF TODAY: The second round of talks on a proposed U.S.-U.K. trade agreement begins today, as the two sides bear down on the goal of signing a deal before the U.S. election — an extremely ambitious deadline that would require negotiations to be substantially complete by early August.

Sending signals to the EU: Some senior figures in the U.K. government hope the threat of diverting British trade elsewhere and moving away from the EU regulatory orbit will provide leverage over Brussels’ red lines, our London colleague Emilio Casalicchio reports. As former Brexit Secretary David Davis put it, the U.S. talks will be “psychologically very useful” for Britain to convince the EU it is no “supplicant” and could walk away and go elsewhere.

That may have been part of Her Majesty’s Trade Commissioner for North America Antony Phillipson’s motive last week when he said the U.S. and U.K. teams had a “shared ambition” of signing the deal before the Nov. 3 presidential election. But under the U.S.’s 2015 trade promotion authority law, that would require USTR to give 90 days’ notice of its intention to sign the agreement by early August and release the text of the agreement by early September.

Wall of silence: The Office of the U.S. Trade Representative has not replied to inquiries about whether it does share an ambition with the U.K. to sign the deal before Nov. 3, and whether that implies the negotiations have to be substantially complete by early August — just three months after the first round of talks started on May 5, an astonishingly quick timeframe.

Reality check: Phillipson’s comments struck one industry official as “hugely ambitious,” given the tough issues that need to be resolved in agriculture and other sectors. Another veteran trade policy specialist dismissed the remarks as a “fantasy” and said the most likely outcome before the election is a partial deal and a promise to complete a bigger pact later.

U.S. Trade Representative Robert Lighthizer seemed to downplay chances for a quick deal earlier this month in remarks to the Economic Club of New York because of the tough compromises required at the end of any negotiation. But he also said the two sides were “laying down texts” for the proposed pact, which is expected to include around 30 chapters.

Definitely ‘not normal’: Phillipson, during an online discussion hosted by the Washington International Trade Association last week, said he expected the second round beginning today to “be hugely significant in terms of seeing where we are.” He also noted that there are intensive talks between the formal rounds to help wrap up a deal as quickly as possible.

ALL QUIET ON THE HONG KONG FRONT FOR NOW: Things have been quiet in Washington on the Hong Kong front since Trump announced on May 29 he was starting the process of ending the former British colony’s special treatment under U.S. law in response to concerns that Beijing was further eroding the city’s autonomy. And they could stay that way for a while.

“I think the next inflection point is when the National People’s Congress Standing Committee drafts and passes the national security law,” Scott Kennedy, a China expert at the Center for Strategic and International Studies, told Morning Trade. That could happen by the end of this month but may drag on into July or August, he said.

What Trump said: Trump directed U.S. officials to begin steps he said would affect “the full range of agreements we have with Hong Kong,” including more favorable treatment when it comes to U.S. export controls or national security reviews of investments in the United States.

He also said his administration was beginning steps to stop treating Hong Kong as a separate customs territory, which would expose its exports to the U.S. to the same tariffs Trump has imposed on more than $350 billion worth of Chinese goods.

What Trump cares about: A bigger issue for Trump is whether to pull out of the phase one trade deal that his administration signed with Beijing in January, said Derek Scissors, a China hawk at the American Enterprise Institute. “The president doesn’t care about Hong Kong. China policy is about when to abandon phase one and what to do after that,” Scissors said.

What to expect in the security law: The Standing Committee is expected to cover four areas in the new law: succession, subversion, terrorism and foreign interference in Hong Kong affairs.

The last area — foreign interference — likely will be open to broad interpretation. But generally, companies should be careful to avoid any activities by themselves or their staff that could expose them to charges that they are involved in the first three areas, Thomas So, a Hong Kong-based partner at the Mayer Brown law firm, said during a webinar on Friday.

What to expect on sanctions: Trump has also threatened to impose sanctions on Chinese or Hong Kong officials that it believes are clamping down on Hong Kong’s autonomy.

Those are likely to be limited, targeted and incremental in nature, but they could impact any financial institutions that do business with those officials, Mayer Brown partner Tamer Soliman said. “A good thing to be doing right now is to be reviewing asset and account portfolios for likely exposed persons and sort of assessing the impact of potential sanctions,” he added.

CIMC-Tianda, the Chinese company, was once found guilty by a U.S. district court of stealing the intellectual property of Jetway Systems, a U.S. company that makes airplane boarding bridges, and then using it to undercut Jetway in contract bids. A court order barred CIMC-Tianda from selling designs other than its own for a decade, but that ban expired and the Chinese company has been bidding on U.S. airport projects across the country.

Today’s problem: Lawmakers like Sens. Marco Rubio (R-Fla.), John Cornyn (R-Texas) and Gary Peters (D-Mich.) have introduced legislation, urged the FAA to step in and reached out directly to airport authorities asking them to reject the bids, so far without much traction.

The timing of the push is largely centered around an upcoming contract In Miami, which Tianda appears poised to win. Local officials are considering two bids to build 12 jet bridges at Miami International Airport: one from the German engineering firm ThyssenKrupp (which has had its own tangles with CIMC-Tianda over boarding bridges) and another from Miami-based North American Construction Co., which lists CIMC-Tianda as a subcontractor.

The airport’s request for proposals says the lowest bid will be chosen, and CIMC-Tianda’s bid is the lower of the two. (A spokesman for the airport said the bids are still being evaluated.)

AZEVÊDO, OTTAWA GROUP TALK WTO REFORM TODAY: Outgoing WTO Director-General Roberto Azevêdo and trade leaders from the 13 members of the Ottawa Group will meet virtually today to talk about how the global trading body can address the impacts of the pandemic while adapting trade rules to prepare for future crises. The group is led by Canada and includes Australia, Brazil, Chile, the European Union, Japan, Kenya, Mexico, New Zealand, Norway, Singapore, South Korea and Switzerland.

Trump isn’t helping: Ahead of today’s meeting, Azevêdo said Sunday that Trump’s criticism of the WTO has been damaging but acknowledged that the rules need to be updated and there are U.S. efforts behind the scenes to get it done.

“There is a lot going on at this point in time. The U.S. is criticizing but it is also engaging,” Azevêdo said on the BBC’s Andrew Marr show.

NIGERIA’S WTO CANDIDATE PITCHES HERSELF AS U.S.-CHINA PEACEMAKER: Ngozi Okonjo-Iweala, a former No. 2 at the World Bank who is now heading a vaccine alliance in poor nations, has established herself as an early front-runner in the race to become next director-general of the WTO — a position that should ideally be filled by September.

In an interview with our POLITICO Europe colleagues, Nigeria’s candidate pitched herself as an “objective arbiter” who could convince Beijing and Washington that it was in their mutual interest to get the WTO running again. She also acknowledged that sweeping reform is needed and hinted that she was willing to engage in the debate over China’s status as a “developing country” at the global trading body. 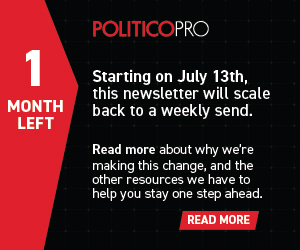 — USTR announced Friday that Julie Callahan will serve as the assistant U.S. trade representative for agricultural affairs and commodity policy. Callahan has been serving in the role in an acting capacity since April and has previously served as a deputy assistant USTR and senior director in USTR’s agricultural affairs office. She also has worked at the FDA and USDA’s Foreign Agricultural Service.

— The U.S. Export-Import Bank’s board of directors voted Friday to give Congress 35 days’ notice of two potential transactions, both involving commercial aircraft. The notification is required for deals that exceed $100 million in value or that involve the export of nuclear energy equipment to give lawmakers a chance to weigh in before the board votes whether to approve the deals.

— Millions of job losses due to the pandemic are at risk of becoming permanent, Bloomberg reports.