The biggest business lobby group in the US gave a stark warning to Britain last month, as they claimed that the continuing Brexit uncertainty “risks limiting prospects” of a transatlantic trade deal. According to a report by The Times, the United States Chamber of Commerce said that it would make sense for the UK to “reset its relationship” with the EU before concentrating on the terms of its other key trade partnerships. Companies across the US have invested more than $750billion (£600billion) in Britain, the organisation noted, with many doing so “to access the larger EU single market”.

The warning came as Liz Truss, the International Trade Secretary, launched the first round of formal negotiations over an agreement via video call with Robert Lighthizer, President Donald Trump’s chief trade negotiator.

The upcoming US presidential election, though, due to take place on November 3, could further complicate things for Britain.

Joe Biden, Mr Trump‘s Democratic rival, is said to be against the landmark free-trade deal between the two nations.

His position on the matter is not exactly known, but Democratic Party leaders have been much more lukewarm on Brexit than leading Republicans. 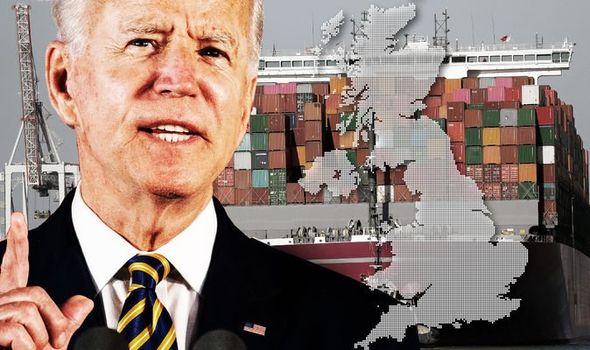 However, there is another partnership the former Delaware Senator could favour, which is likely to be even more attractive for Britain: the Comprehensive and Progressive Trans Pacific Partnership (CPTPP).

Mr Biden backed the pact when he was Vice President and has suggested that he would like the US to reconsider membership if he is elected.

The negotiations were driven initially by the Americans – but President Trump decided to withdraw.

JUST IN: Why Brexit leaves Germany’s EU strength on brink of collapse

Despite the Americans backing out, the other 11 members decided to proceed with the agreement, becoming the third largest free trade area in the world.

The CPTPP covers nearly 14 percent of the global economy.

Moreover, last week, as hopes of an early US trade deal faded, Ms Truss said that the UK would seek membership of the CPTPP.

According to former International Trade Secretary Liam Fox, Britain could strike the partnership by the end of 2021.

In an episode of ‘Chopper’s Brexit Podcast’, the Conservative MP said in February: “CPTPP+Britain is about the same share of global trade as the EU minus Britain.

“But perhaps more important is the fact that if Britain were to join CPTPP, it might make it easier for a future US administration to come back, given that it would be a slightly different entity with the UK in it.

“That’s got a lot of attraction for some congressmen.

“If the US were to join after Britain, we are talking about a trade grouping, which represents 42 or 43 percent of the entire world’s GDP.”

He also noted that the partnership could benefit Britain in negotiations with Brussels.

He added: “It does bring us leverage.