Last week, International Trade Secretary Liz Truss announced Britain will press ahead with a bid to join a major trade tie-up between countries including Canada, Australia and New Zealand after leaving the EU. According to The Times, Ms Truss said that the partnership of the Comprehensive and Progressive Agreement for Trans-Pacific Partnership (CPTPP) is the “next logical step” for post-Brexit Britain. She added: “I say to our old friends, Britain is back.” 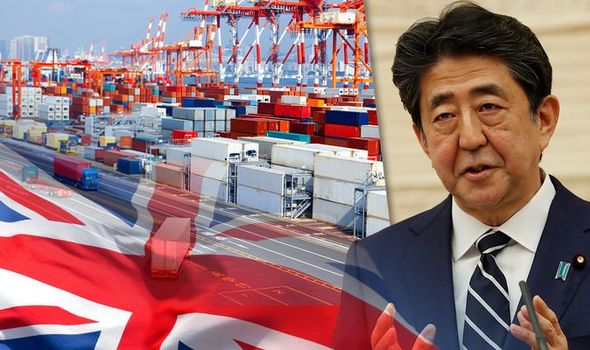 Moreover, in a recent report for The Diplomat, independent research fellow Yukari Easton, whose research focus is upon international relations, diplomacy, and security issues in the Asia-Pacific region, explained why Britain’s interest in the group is viewed with particular interest by Tokyo.

The earlier incarnation of the Trans-Pacific Partnership (TPP) was originally conceived as an economic pillar supporting former US President Barack Obama’s “pivot to Asia”.

However, US participation was scrapped by President Donald Trump on his third day in office.

With the US having shunned the dream of a trading bloc that would have accounted for 40 percent of world trade, it was Japan that took the lead in making the TPP a reality.

In 2019, Japan concluded an FTA with the US independent of the TPP, but has kept the door open for the US to potentially join the bloc in the future.

While Ms Easton noted that there is no illusion that the UK would, in any way, replace the importance of the US, the country is right now a good substitute for Japan.

She wrote: “There have been minimal trading frictions or diplomatic tensions in modern times.

“Japan is unflinchingly supportive of the UK joining the CPTPP and has pledged that it will ‘spare no efforts’ in this endeavour.

“Stronger trade ties would boost the Japanese economy while making the United Kingdom and Japan closer still in terms of their diplomatic relations.”

Ms Easton noted that the logic of closer Anglo-Japanese trade ties, either through a bilateral arrangement or under the CPTPP, is clear.

She added: “Such an achievement would represent a clear economic and diplomatic win for both nations.

“With political will on both sides to maintain the current momentum, such a deal is well within reach.”

Moreover, the academic argued that given the now certainty of the UK and EU transitional arrangements ending on December 31, the pressure is therefore on for London to rapidly conclude a free trade agreement with the bloc, as well as with its non-EU trading partners.

She concluded: “Progress in trade talks outside of Europe can only strengthen the British hand in its negotiations with the EU.”