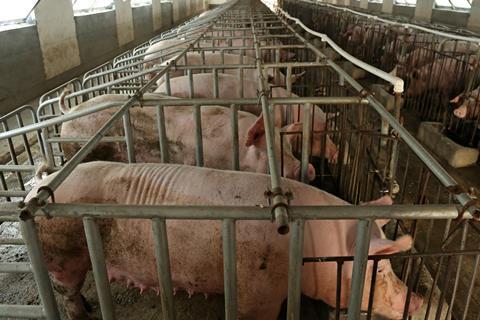 Sow stalls – metal cages used to contain female breeding pigs for 16 weeks during pregnancy – were banned for use in the UK in 1999 on cruelty grounds. They are also partially banned in the EU, where they can only be used for the first four weeks in a sow’s pregnancy.

They are also banned across nine states in the US, where they are known as gestation stalls. But in the remaining US states, it’s permissible to keep sows in stalls for their entire 16-week gestation period. They are also still permitted in Canada.

The controversial β-agonist ractopamine, used to boost meat gains in livestock, has been banned for use across the EU since 1996 on human safety grounds. It has also subsequently been banned by China, Taiwan and Russia.

Research has shown the drug, which is a cardiac simulator, increases anxiety in humans. There have also been suggestions it could be a carcinogenic, although there is no scientific proof.

Livestock treated with ractopamine can suffer significant adverse health effects, according to according to NGO Food & Water Watch. Producers have reported pigs treated with the drugs experiencing “hyperactivity, trembling, broken limbs, inability to walk and death”.

The FDA acknowledges that ractopamine “may increase the number of injured and/or fatigued pigs”.

However, the drug is still licensed for use in the US, Canada and Brazil.

Castration of male piglets, while permissible across Europe, is banned under the Red Tractor Scheme, which covers 95% of piglets in the UK. The procedure, which is used to prevent ‘boar taint’ in meat, leaves piglets in pain for days.

However, in the US it’s still legally permissible to castrate male piglets without anaesthetic. It’s allowed in Canada, too, though some guidance is at least given on pain relief.

Dairy farmers in the US can still use the growth hormone bovine somatotropin (bST), which has been banned in the UK since 1990 on animal welfare grounds. The drug – which can boost milk production by 15% – has also been banned across the EU since 2000 and is forbidden in Canada, Australia, New Zealand, Japan and Argentina.

According to a report by the EU Scientific Committee on Animal Health and Welfare in 1999, bST increases the risk of mastitis, lameness, indigestion and diarrhoea, as well as the incidence of several diseases in dairy cows.

The legal stocking density for broilers throughout the EU is 42kgs/m2. In the UK however, domestic legislation has restricted this to 39kgs/m2. This gives birds more space to move around and exhibit normal behaviours.

UK poultry producers are also required clean out sheds between flocks, while houses must have enough light to encourage natural movement, thus reducing welfare problems like footpad dermatitis and hockburn.

In the US, there are no federal regulations overseeing the standards for broiler chicken production, such as environmental conditions or stocking density limits.

US poultry farmers use lower lighting systems, which means birds are artificially encouraged to be less active and exhibit less natural behaviour. They are also not required to clean out sheds between flocks – meaning American birds can end up standing in filth from multiple flocks.

In the US, there are no federal legislative controls on welfare requirements considered vital in the UK. Requirements that vary across states include space allowances, bedding, lighting, diet, social interaction, routine procedures on youngstock, veterinary oversight, transport and slaughter.

Journey times for livestock in the US can be up to 28 hours without rest.

In contrast in the UK, four-fifths of dairy cattle (80%) have access to pasture. Tie stalls are not used in the UK.

Veal crates have been banned in the UK since 1990 and across the EU since 2007 on animal welfare grounds. They have never been used in Australia and New Zealand, where calves are raised in group housing enclosures.

However, they are still used to confine dairy calves in the US and Canada. The calves are sometimes chained and often do not have enough room to turn around, according to Compassion in World Farming. To keep their flesh pale and tender, calves kept in crates are fed on an unhealthy diet of milk or milk replacer.

Nine US states have also now banned veal crates, but their use is still permitted across the rest of the US and in Canada.

Battery cages give chickens a space smaller than an A4 sheet of paper and were banned in the UK, and across the EU, in 2012. Egg producers are now required to provide hens with larger, so-called enriched cage systems, which include nesting and scratching areas that allow more natural behaviour. The UK’s major retailers have all agreed to phased out the sale of eggs from caged egg systems altogether before 2025.

In Canada, there is a moratorium on construction of new battery cages from 1 April 2017, and their use will be gradually phased out towards enriched cage or cage-free systems by 2036.

However, their use is still permitted in some non-EU egg producing countries, such as the US, Ukraine and Australia.

In Australia, there are some sub-national bans on battery cages, while in the US the states of California, Massachusetts, Washington, Michigan, Ohio, and Rhode Island had passed laws banning the use of battery cages as of March 2020. But they remain legal elsewhere in the country.

In the UK we have tight controls on the use of antibiotics in livestock production in an effort to tackle the growing problem of antimicrobial resistance (AMR), described by the World Health Organization as “one of the biggest threats to global health, food security, and development” in the world today.

But the rest of the world does not have such strict rules. Antibiotics deemed critically important for human health are still permitted for use as feed additives in Japan, Australia, China, Canada, Brazil, Malaysia and India.

However, US rules on antibiotics in livestock remain significantly behind those in the UK and the EU, and antibiotic use is much higher in US livestock production.

The Veterinary Medicines Directorate puts antibiotic use in the UK dairy industry at 17mg/kg in 2017, for example. That compares with 237mg/kg in US dairy and beef cattle, according to the Alliance to Save Our Antibiotics.

Tail docking and mulesing in sheep

Short tail docking (where the majority of the tail is removed) is not allowed in the UK. Tail docking is only permitted if the failure to do so would lead to a fly strike, but if carried out a longer tail dock is required to minimise pain or discomfort.

Similarly, mulesing – the removal of strips of wool-bearing skin from around the buttocks of a sheep – is not carried out by UK farmers on animal welfare grounds. It can only be carried out by a veterinary surgeon under local anaesthetic.

However, short tail docking is still a regular practice in New Zealand and Australia, where farmers are not required to use pain relief if the lamb is less than six months old.

Mulesing, which has now also been banned in New Zealand, is still legal in Australia, and in most states can be performed without any pain relief.

Somatic cells are white blood cells that fight infection and a high count is an indicator of bovine mastitis – a painful udder infection in cows. In the EU, milk with a somatic cell count of more than 400,000 per ml is deemed unfit for human consumption.

Somatic cell counts above 400,000 per ml aren’t a food safety issue, but they are an indicator of poor animal health. According to AHDB, levels above 200,000 per ml can indicate an infection.

Growth hormones, such as testosterone propionate, progesterone and trenbolone acetate, are still used in cattle production in the US, Canada and Australia.

They’ve been banned across the EU since 1981 on health grounds, with restrictions also placed on imports of hormone-treated beef from third countries.

Following objections from the US and Canada that there was no evidence hormone-treated beef has a negative impact on human health, a WHO panel ruled in 1999 that the EU measure was not in line with global trade rules.

However, the EU appealed and most of the WTO ruling was reversed, with the exception that such a measure should be based on an assessment of the risk to human health.

As a result, a European scientific advisory body re-evaluated the risks to human health from residues in beef from six hormones used for growth promotion in 1999 and concluded no acceptable daily intake could be established. Further reviews in 2000 and 2002 confirmed this opinion.

US abattoirs use treatments such as chlorine washes and lactic acid sprays to clean the external surfaces of dressed carcases after slaughter.

It’s something that’s mostly banned in the UK and Europe, where food safety rules are designed to keep meat clean throughout production and processing, without relying on decontamination processes.

Chlorine-washes for chicken have become particularly controversial. While there is no evidence they pose a risk to human health, there are concerns they could be used as an “easy fix” to clean up dirty meat.

Europe did authorise the use of lactic acid for beef carcases in 2012, but the UK beef supply chain doesn’t use the treatment because the high standards in British slaughter halls minimise faecal contamination, meaning there is no need to rely on chemicals to clean up the meat.

Neonicotinoid seed dressings on oilseed rape were banned across the EU (including the UK) in 2013 due to concerns over their impact on pollinators.

Neonicotinoids, which are nerve agents, have been shown to cause harm to wild bees and honey bees, such as damaging memory and reducing queen numbers.

However, their use is still permitted for oilseed rape in countries like Ukraine, Australia, Canada, which export vegetable oils and margarine.

Chlorpyrifos is a powerful insecticide that has been linked to brain damage in children. Studies have shown even low exposure to chlorpyrifos – which belongs to the same class of chemicals as sarin nerve gas – is associated with reduced IQ, attention disorders, and autism in children and infants.

It’s been banned since 2016 in the UK due to concerns over its impact on non-pest species. Eight EU member states have banned, or never authorised, the use of chlorpyrifos products: Denmark, Finland, Germany, Ireland, Latvia, Lithuania, Slovenia and Sweden.

Several US states have also banned chlorpyrifos but a federal ban has been blocked by the Trump administration since 2017, so it is permitted for use on crops across most of the country.

Chlorothalonil, a fungicide that prevents mildew and mould on a variety of crops, has been banned across the EU since May 2020 due to concerns over its impact on water quality and the environment.

A review by the European Food Safety Authority (Efsa) concluded it was impossible to exclude the possibility that the breakdown of the chemical could cause damage to DNA. It also warned there was a high risk to amphibians and fish from its use.

However, it is still used around the world to protect crops. It is routinely used in South America to grow soyabeans, for example.