The Dallas Morning News is publishing a multi-part series on important issues for voters to consider as they decide who to vote for president this year. This is the second installment of our What’s at Stake series, and it focuses on foreign policy. Find the full series here.

With the most important election in generations just months away, Americans are rediscovering that their trading ties define the nation’s political and even security connections — not just economic links — with the rest of the world.

The Revolution of 1776 arose out of protest against the British Empire’s infringement of liberties, including taxes on trade. The Founders thought that a new approach to trade could create a changed international system; they did not see trade solely as an economic efficiency. From the start, Americans drew a connection between economic and political freedom and embraced the idea that private parties, not states, should be the agents of commerce. 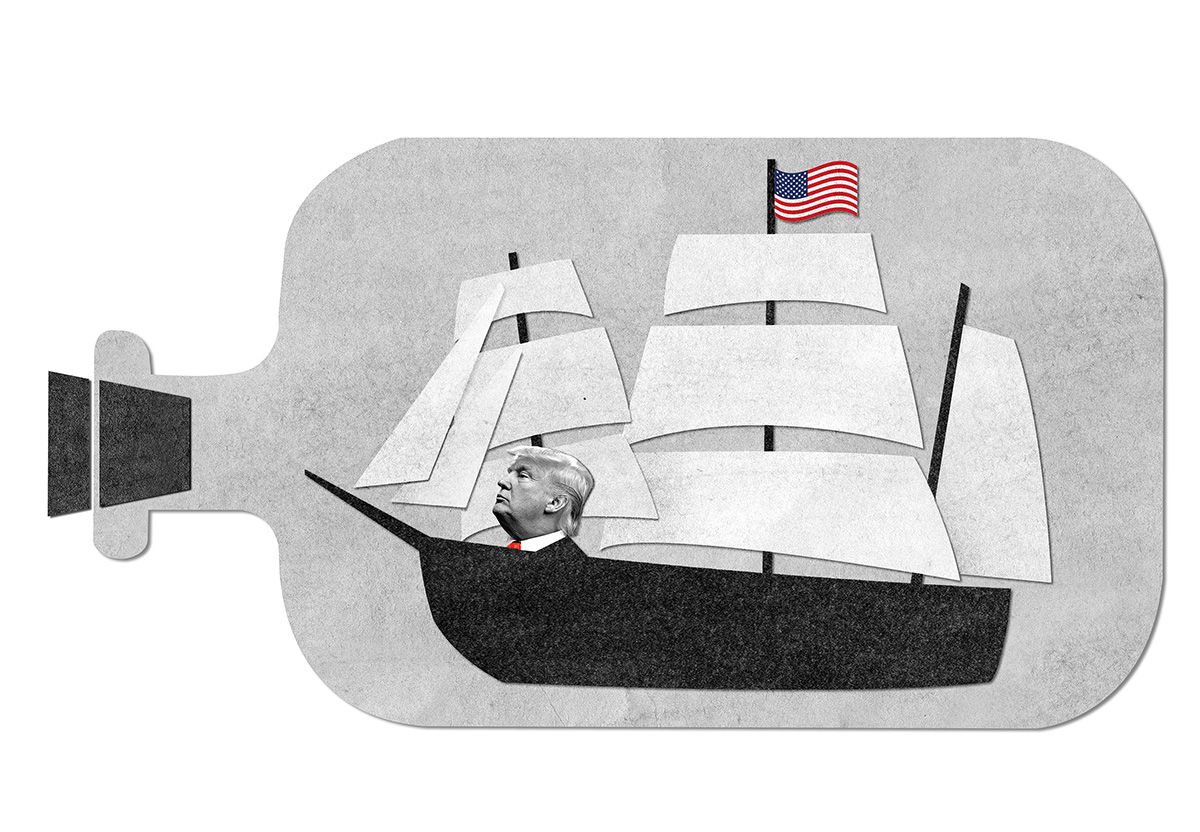 The Founders expected that trade would be the new nation’s principal foreign policy. In 1807, however, President Thomas Jefferson learned the limits of restricting trade to compel behavior by others: Frustrated by British and French seizures of U.S. ships and sailors during the Napoleonic Wars, Jefferson embargoed all U.S. maritime exports. His policy hurt Americans more than Europeans. Nevertheless, over the next two centuries, Americans continued to experiment with sanctions — of trade and then finance — to weaken adversaries or signal displeasure.

America’s interest in trade encouraged the building of the U.S. Navy. Jefferson deployed the country’s new ships to defeat the Barbary pirates in the Mediterranean. The Navy, in turn, assisted in opening new markets, most notably Japan in the 1850s. Dreams of a vast trade with China drew American merchants and then missionaries, educators and engineers. Secretary of State John Hay’s Open Door policy for China in 1899 was as American in concept as the Founders’ plans of 1776.

Woodrow Wilson based his defense of neutrality in World War I on America’s right to trade. After the war, American officials recognized the interconnections among Germany’s reparations, foreign debts to the United States, and debtors’ abilities to earn dollars by exporting to the United States. But domestic politics blocked the development of a comprehensive solution.

Then in the 1930s, Americans relearned, the hard way, how trade affected economics, politics and security. The Smoot-Hawley Tariff Act of 1930 raised the average U.S. tariff to 59.1%. The Great Depression deepened, European nations turned to economic autarky and national socialism, and Japan marched toward a Great East Asia Co-Prosperity Sphere.

In 1934, Secretary of State Cordell Hull persuaded President Franklin Roosevelt to back a Reciprocal Trade Agreements Act that authorized the executive branch to negotiate agreements to lower tariffs. By 1944, Hull had negotiated 31 agreements with 28 countries. He managed to lower average U.S. tariffs to below pre-Smoot-Hawley levels. Just as important, the core principles of Hull’s agreements became the basis for the postwar trading system and an economic strategy of combining reopened markets with self-help assistance.

Nevertheless, the domestic politics of trade have always been thorny. Even in 1947, when the U.S. economy stood pre-eminent, protectionism almost subverted the launch of a new international General Agreement on Tariffs and Trade (GATT), which fueled a half-century of economic growth. The U.S. added eight more rounds of global trade negotiations, eventually expanding the GATT to become the World Trade Organization (WTO) in 1995.

The U.S. used this international system to devise new rules for trade and technology as American businesses explored economic frontiers. The trade in manufactured goods expanded to agriculture, services, intellectual property protections, investment and dispute settlement. By negotiating free trade agreements (FTAs), the U.S. demonstrated the usefulness of rules on anti-corruption, transparency, border procedures, information technology standards and e-commerce, the environment and core labor standards. Now the challenge is devising rules for the use, privacy, security and storage of data.

America’s 20 FTA partners represent about 10% of the world’s GDP, but over 40% of U.S. exports. NAFTA became the cornerstone of a North American partnership that extends far beyond trade relations. The African Growth and Opportunity Act uses trade to assist Africa’s development. The Trans-Pacific Partnership (TPP), negotiated by the George W. Bush and Barack Obama administrations, would have added five Pacific economies to six existing FTA partners, thereby establishing common rules that all 12 countries could have pressed for China to accept. The Trump administration pulled out of the TPP, but the others proceeded without us.

More recently, Trump officials have sought to paralyze the World Trade Organization system for resolving trade disputes by blocking appointments to the WTO’s appellate body, even though the U.S. has been a principal beneficiary of WTO rulings, especially against China. Frustrated by U.S. intransigence, the European Union, Australia, Canada, Mexico, China, and 17 other economies have established an alternative for WTO appeals — again with the U.S. left out.

Historically, America’s openness — to goods, capital, people and ideas — has given the U.S. an advantage. Competition compelled the U.S. to recognize its mistakes and fix them. Under President Donald Trump, the U.S. has reversed course. In his inaugural address, Trump proudly proclaimed himself a protectionist; not since Herbert Hoover has a U.S. president openly called for adding costly barriers to trade. Under Trump, the U.S. has lost export markets by dropping out of deals such as the TPP, which continues under a new name with Canada, Mexico, Japan, Vietnam, Chile, Peru, Malaysia, Brunei, Singapore, Australia and New Zealand forming the third-largest free trade area in the world by GDP.

The Trump administration’s protectionism has also provoked worldwide retaliation, hurting America’s most productive businesses and farmers. His tariffs have cost American businesses and families — even for health care supplies during the pandemic. Increased charges and uncertainties about doing business in the U.S. have hurt foreign investment in America, holding back job and wage growth. And Trump disdains promoting new rules for innovative sectors, instead favoring government-controlled purchases like in old-style mercantilism.

Trump argues that these costs are the price Americans must pay for his deal-making. But his negotiations — as with the U.S-Mexico-Canada Agreement (USMCA) or South Korea — generally add quotas and expenses, while weakening protections for investors and adding doubts that will stymie a badly needed economic recovery. After three years of costly tariffs and retaliation, Trump’s trade deal with China ended up principally as a purchasing package, instead of requiring rules to open China’s markets; so far, China’s buying has not reached even half of its year-to-date targets for covered categories, and Chinese purchases of other goods have actually fallen about 30%.

Critical U.S. allies — across the Atlantic and Pacific— have become prime targets of Trump’s trade wrath. Rather than rallying free countries to a common cause of open societies, law, and liberty, Trump insults friends and alienates their publics. He bludgeons allies with demands for tribute, while courting authoritarian foes such as Russia’s Vladimir Putin. America throws away its best cards when it abandons its commitment to open, fair rules — backed by and enforced with allies. These are also the principles that sustain U.S. security interests, such as freedom of the seas, including unrestricted passage in the South China Sea.

Challenges of security, technology, disease and pandemics, migration, energy and the environment, and financial and information flows are likely to increase. The U.S. entrepreneurial model of science and technology, backed by government and university research, faces a challenge from China’s state-directed system. In years to come, as in the past, the U.S. will be more effective — and powerful — if it can work with allies and partners that share common interests and ideals. As part of this design, Americans will need to determine what type of international trade, technology, and economic system they want. The Spirit of 1776 looked to liberty, reformation, innovation, openness and opportunity. So did the flexible design of the past 70 years. A breakdown or repudiation of that inherited system of economics and security will prove costly and dangerous.

Robert B. Zoellick was president of the World Bank, U.S. Trade Representative and deputy secretary of state. His new book, “America in the World: A History of U.S. Diplomacy and Foreign Policy,” was just published by Twelve.

Got an opinion about this issue? Send a letter to the editor, and you just might get published.