The two sides have been in negotiations since June in the hope of agreeing a deal quickly, in order for it to be ratified by Japan’s parliament this year. Although Secretary of State for International Trade, Liz Truss, and the Department for International Trade (DIT) said there was no hard deadline in place, the Prime Minister’s spokesperson this week insisted the deal could be struck by next Monday. Although negotiations continue, discussions over tariffs on British agricultural products, have caused negotiations to be delayed, and this self-imposed target is set to be missed.

One Department for International Trade spokesperson told City A.M. on Tuesday negotiations may now go beyond next week, although there is hope of the deal being struck in the coming weeks.

Despite this, a DIT trade spokesperson told Express.co.uk, negotiations have been positive and productive with many areas of the deal agreed.

They also hoped to have an agreement in the coming weeks which will go further than the Japan-EU deal, and will increase the UK’s position as a global technology superpower.

The deal between the UK and Japan had been hoped to be the first free trade agreement struck by Britain since departing the EU in January. 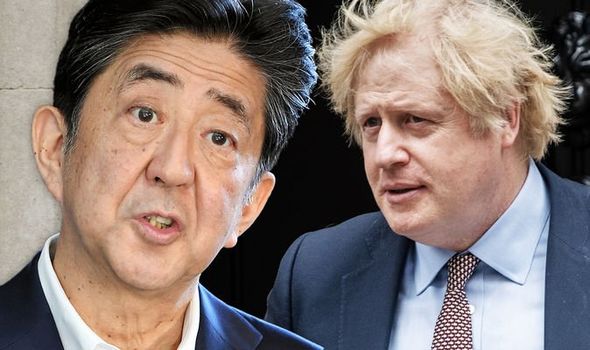 Japan’s foreign minister Toshimitsu Motegi flew to the UK earlier to push talks ahead in order to agree a deal by the end of this month.

However, prior to this fresh delay, negotiations had also been delayed due to the inclusion of Stilton cheese in talks.

Ms Truss has pushed for a reduction in tariffs on British agricultural exports, while the overall framework of the deal is expected to be based on the EU-Japan deal.

On Monday, a Downing Street official said: “We have reached a consensus in many elements of the deal, including digital data and financial services that goes beyond the EU-Japan trade deal.

Brexit news: Liz Truss hopes for a deal by next month (Image: Flickr No 10)

“We still wish to reach a formal agreement by the end of this month.

“Many major elements of the deal have been agreed.”

If agreed, the deal will also include increased access to the Japanese markets for British companies.

Tariffs could also be dropped on products such as Japanese cars in the hope of securing a deal better than the EU in certain areas.

According to Government statistics, the total value of trade between the UK and Japan is estimated at £29billion in 2018.

The Government has also indicated a free trade agreement could increase trade between the two states by £15.2billion.

The agreement is also seen as the first step for the UK to join the Comprehensive and Progressive Agreement for Trans-Pacific Partnership (CPTPP).

The CPTPP is made up of countries such as New Zealand, Australia and Canada.

The area is one of the world’s largest free trade areas and represents 13 percent of global gross domestic product.

This month, Ms Truss said: “Our shared aim is to reach a formal agreement in principle by the end of August.”

Brexit news: Liz Truss is in the midst of several negotiations (Image: PA)

If a deal is not agreed by the end of this year the two states will trade on World Trade Organisation regulations and rules.

The DIT said it will not comment any further on live negotiations.