Talks between the two sides hit a breakthrough on Friday as the UK announced its first landmark free trade agreement with the state. Speaking to Express.co.uk prior to the agreement, head of Asian Studies at Edinburgh University, professor Aaron William Moore claimed Japan will take a more keen interest in the European economy than the UK’s. He also indicated Japanese officials were “dismayed” by the result of the EU referendum.

Prof Moore also revealed Japanese officials had been surprised by the lack of progress made between the UK and EU.

He said: “My assumption would be that the British Government would not conclude a trade deal that would satisfy all the concerns of Japanese investors.

“We will probably see a greater attraction in the EU rather than Great Britain, at least for manufacturing or industries like that.

“They haven’t made progress since 2016 so I would assume that negotiations are going to fail with the EU.

BREXIT BULLETIN: Sign up for our special edition newsletter with exclusive insight from this week’s crunch talks 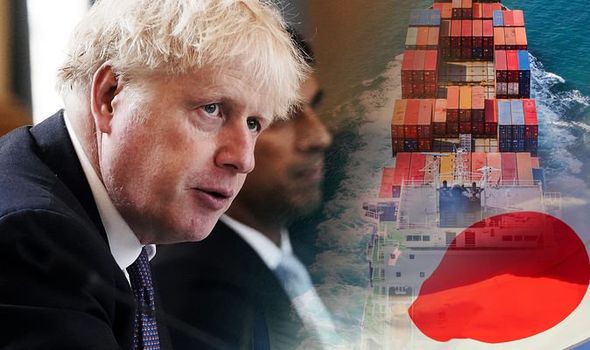 “My overall impression was that Japanese business and government leaders were really dismayed with the Brexit outcome.

“They were really unhappy with the trade negotiations with the EU and the way that the British government has been behaving.”

Negotiations began in June but stalled last month over the issue of UK agricultural exports – in particular Stilton cheese.

However, International Trade Secretary, Liz Truss agreed the deal in principle with her counterpart Toshimitsu Motegi after a breakthrough in talks.

She said: “This is a historic moment for the UK and Japan as our first major post-Brexit trade deal.

“The agreement we have negotiated – in record time and in challenging circumstances – goes far beyond the existing EU deal, as it secures new wins for British businesses in our great manufacturing, food and drink, and tech industries.”

In 2018, the value of trade between the UK and Japan was valued at over £29billion, although the new free trade agreement could increase that figure by £15.2billion.

Despite these potential benefits, some officials have stated the introduction of the UK Internal Market Bill, which allegedly violates elements of the withdrawal agreement, could harm Britain’s negotiating stance going forward.

As part of the negotiations with Japan, the UK has pledged to soon join the Comprehensive and Progressive Agreement for Trans-Pacific Partnership (CPTPP).

The CPTPP is a free-trade agreement between 11 countries including Canada, Japan, New Zealand and Australia.

Combined together, the free trade agreement accounts for 13 percent of the world’s GDP.

She said: “Joining CPTPP would send a powerful signal to the rest of the world that Britain is prepared to work with countries who champion free and fair trade.

“Membership would bring new opportunities for our go-getting businesses, more choice for our consumers, and provide us with greater economic security.

“Strategically, it would help us forge closer ties with the wider Pacific region and put us in a stronger position to reshape global trading rules.”

The Department for International Trade has been contacted for comment.