The forex markets are generally staying in tight range today, without much reaction to better than expected job data from US and GDP from Canada. Nor was there much movements after comments from ECB President and BoE Chief Economist. Subdued month-end trading is keeping volatility very low. Nevertheless, it’s hopeful that October would start with some determining moves, with important data like US ISM and non-farm payroll featured. We’d just have to wait a little longer.

Technically, Gold is not giving up on its rebound yet and it’s trying hard to get rid of 4 hour 55 EMA cleanly. Overall outlook is unchanged that Gold is in a corrective pattern from 2075.18. Sustained trading above 4 hour 55 EMA could build the base for a test on 1920.06 minor resistance. Firm break there would argue that the consolidation has completed and Gold is ready for a take on 2075.18 high again. If that happens, we should also see EUR/USD breaking through 1.1752 support turned resistance decisively and heads for a test on 1.2011 high. 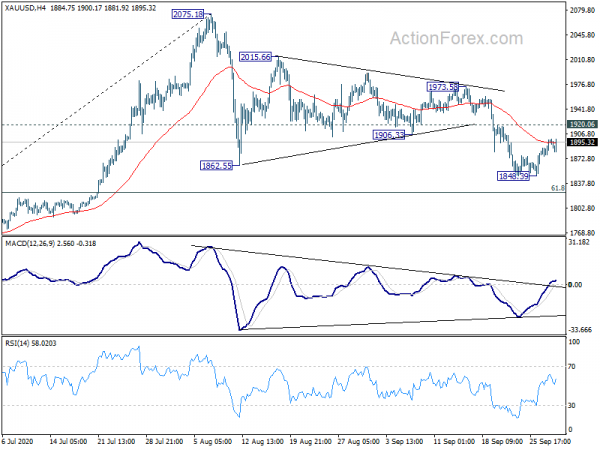 “The labor market continues to recover gradually,” said Ahu Yildirmaz, vice president and co-head of the ADP Research Institute. “In September, the majority of sectors and company sizes experienced gains with trade, transportation and utilities; and manufacturing leading the way. However, small businesses continued to demonstrate slower growth.”

Canada GDP grew 3.0% mom in July, slightly above expectation of 2.9% mom. That’s the three consecutive monthly gain, offsetting some of the steep drops in March and April. But overall economic activity was still about -6% below February’s pre-pandemic level.

All 20 industrial sectors posted increases in July as the agriculture, utilities, finance and insurance as well as real estate rental and leasing sectors surpassed their February pre-pandemic levels, joining retail trade which did so in June.

BoE Haldane: None of the conditions of negative rates satisfied

BoE Chief Economist Andy Haldane said in a speech that the MPC minutes “contained no such signal” as it’s introducing negative rates in the near-term. The operational feasibility assessment of negative rates is “likely to take a number of months”. Then, judgement on negative rates will depend on the economic outlook. The decision would then depend on the balance of costs and benefits, , with comparison to other monetary tools.

“All three of these conditions would need to be satisfied before negative rates became a reality. At present, none of those conditions is in my view satisfied,” he added.

Haldane also urged that “encouraging news about the present needs not to be drowned out by fears for the future. Now is not the time for the economics of Chicken Licken”

“This is human nature at times of stress. But it can also make for an overly-pessimistic popular narrative, which fosters fear, fatalism and excess caution. This is unhealthy in itself but, if left unaddressed, also risks becoming self-fulfilling.”

ECB President Christine Lagarde said in a speech that a”wider discussion today” among central banks is whether they should “commit to explicitly make up for inflation misses when they have spent quite some time below their inflation goals.”

“If credible, such a strategy can strengthen the capacity of monetary policy to stabilise the economy when faced with the lower bound,” she said. “Promise of inflation overshooting raises inflation expectations and therefore lowers real interest rates.”

“While make-up strategies may be less successful when people are not perfectly rational in their decisions – which is probably a good approximation of the reality we face – the usefulness of such an approach could be examined,” she added.

Swiss KOF Economic Barometer rose to 113.8 in September, up from 110.2, beat expectation of 106. That’s the four rise in a row after a historic drop earlier this year. KOF said, “at present, the economy is taking a V-​shaped course, so that a recovery of the Swiss economy can be expected for the time being. However, a second wave of COVID-​19 cases could lead to a sharp revision of this assessment.”

China’s NBS PMI Manufacturing rose slightly to 51.5 in September, up from 51.0, above expectation of 51.2. NBS PMI Non-Manufacturing rose to 55.9, up from 55.2, above expectation of 54.6. “Although overall manufacturing demand has improved, the industry has recovered unevenly,” said Zhao Qinghe, an NBS official. “In addition, the global epidemic has not yet been fully and effectively controlled, and there are still uncertain factors in China’s imports and exports.”

Wang Zhe, Senior Economist at Caixin Insight Group said: “The sharp rise in overseas demand has complemented the domestic market… The strength of the manufacturing sector will take some of the pressure off policymakers going forward. However, the job market remains worrisome, as the improvement in employment relies on a longer-term economic recovery and a more stable external environment.”

New Zealand ANZ Business Confidence rose to -28.5 in September, up from August’s -41.8, but revised down from preliminary reading of -26.0. All sectors stayed negative with Agriculture at -72.2 and services at -31.7. Own Activity Outlook improved to -5.4, up from August’s -17.5, revised up from preliminary reading of -9.9. Agriculture activity was positive at 13.6 and contraction at 10.8. Services activity was worse at -12.1.

ANZ said business “appear relatively optimism”. But “as a reality check, though, the levels of most activity indicators remain very subdued relative to pre-COVID days, and are still at levels regrettably reminiscent of 2009.”

USD/JPY’s rebound from 104.00 is still in progress despite some loss of upside momentum. Sustained break of 55 day EMA (now at 105.96) will raise the chance of bullish reversal and target 106.94 resistance for confirmation. On the downside, though, below 104.92 minor support will turn bias back to the downside for retesting 104.00 instead.

In the bigger picture, USD/JPY is still staying in long term falling channel that started back in 118.65 (Dec. 2016). Hence, there is no clear indication of trend reversal yet. The down trend could still extend through 101.18 low. However, sustained break of 112.22 resistance should confirm completion of the down trend and turn outlook bullish for 118.65 and above.