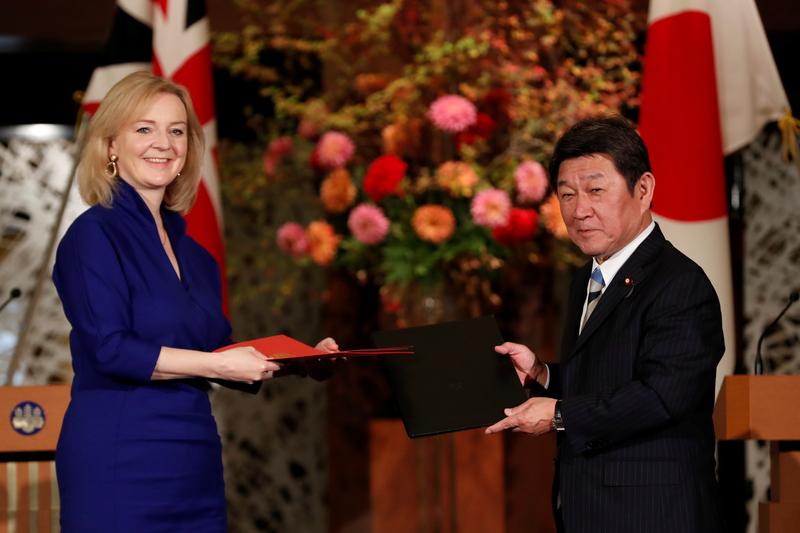 TOKYO (Reuters) – Britain and Japan formally signed a trade agreement on Friday, marking Britain’s first big post-Brexit deal on trade, as it continues to struggle to agree on a deal with its closest trading partners in the European Union.

Britain formally left the EU in January and it has focused on negotiating new trade pacts with countries around the world as its status-quo transition period ends on Dec. 31.

Motegi pointed out that the signing came about in just four and a half months since the start of negotiations.

“This is a manifestation of the determination of Japan and the United Kingdom to carry on vigorously promoting free trade,” the minister said.

Britain has said the deal meant 99% of its exports to Japan would be tariff-free, and that it could increase trade by 15.2 billion pounds in the long run, compared with 2018.

Motegi said after the signing that he had agreed with Truss to work together so that the deal will come into force on Jan. 1, 2021.

In a meeting with Japanese Economy Minister Yasutoshi Nishimura later in the day, Truss said there would be a bigger opportunity with Britain’s presidency of the G7 and Japan’s chairmanship of the TPP-11 next year to challenge rising protectionism and make the case for free trade.

“If UK submits an application to join the TPP-11 next year, Japan will fulfil our role as a chair nation,” he said.

Truss has already said Britain hoped to formally apply to join the CPTPP early next year.