Prime Minister Scott Morrison says he will not be dictated to by other governments’ climate change goals, declaring he is not worried about the future of Australia’s exports as four of the country’s top trading partners adopt net-zero emissions targets.

China, Japan, Britain and South Korea, which account for more than $310 billion in Australian annual trade between them, have all now adopted the emissions target by 2050 or 2060, ramping up pressure on Australia’s fossil fuel industry. Coal and natural gas alone are worth more than 25 per cent of Australia’s exports, or $110 billion each year. 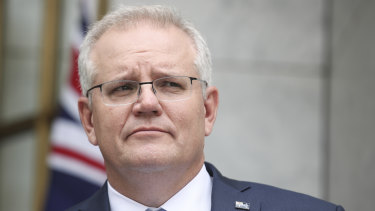 As the Prime Minister spoke in Canberra, the South Korean President Moon Jae-in was addressing his own parliament in Seoul announcing his country would also pursue a net-zero target by 2050.

“Transitioning from coal to renewable energy, the government will create new markets, industries and jobs,” Mr Moon told the National Assembly on Wednesday.

Responding to the UK government’s version of the phone call, Mr Morrison said Mr Johnson understood that Australia would make “sovereign decisions” on the targets it sets.

“It shouldn’t come at the cost of higher prices for the daily things that our citizens depend on,” he said.

“One thing the British Prime Minister and I agree on is that achieving emissions reductions shouldn’t come at the cost of jobs in Australia or the UK.”

Major Australian export companies like Rio Tinto, BHP, major agriculture groups and multinational food companies are pursuing carbon neutrality, which experts say is a move to avoid being stung with trade tariffs or charges by countries that have set net-zero targets.

NSW Energy and Environment Minister Matt Kean said stimulus spending in Australia should be directed towards building a low carbon economy. “Australians are sick and tired of the petty political point scoring and division on climate policy, which has held our country back for over a decade,” he said in a speech to launch the Australia Institute’s annual Climate of the Nation survey.

“[Australians] want government to lead. They want to be assured that we are doing everything we can to reduce the risk of dangerous climate change whilst keeping the lights on and keeping a lid on their electricity bills.”

The Morrison government has argued it will comply with the terms of the Paris climate agreement by reaching net zero by sometime in the second half of the century but has not set a firm target.

Mr Morrison said on Wednesday that Australia’s emissions had fallen by 14 per cent since 2005, compared to 1 per cent for New Zealand and 0 per cent for Canada. Mr Morrison said the world would “not really make a lot of progress” without widespread renewable technology to ensure developing economies like India and Vietnam could also reduce emissions.

“Our record on this speaks for itself. When we make commitments in Australia’s interests then we will meet those commitments as well,” he said.

But top scientists contend that for Australia to honour the Paris agreement – which requires countries to follow the best available scientific advice on how to limit global warming to less than two degrees — the country must reach net zero emissions before 2050.

The federal government’s opposition to commit to reach the target by 2050 also puts it out of step with all states and territories, which are pursuing carbon-neutral goals.

According to an analysis by the Investor Group on Climate Change, 60 per cent of Australia’s two-way trade is now conducted with nations with mid-century net-zero commitments. This is expected to jump to 70 per cent if Democratic presidential candidate Joe Biden wins the United States election next week.

Tim Buckley of the Institute for Energy Economics and Financial Analysis said Australia and its major trading partners were now operating in a net zero by mid-century environment whether they liked it or not.

“If the government doesn’t acknowledge that it is just burying its head in the sand,” he said.

South Korean policymaker Soyoung Lee, an MP with the ruling Democratic party, said: “Korea’s 2050 net-zero announcement will encourage other countries which are still deliberating over a 2050 target year, especially considering that Korea is still heavily reliant on the manufacturing industry and other high-carbon industries.”

The European Union, which has also set a net-zero emissions target by 2050, has proposed a carbon border tax that could see high-emissions exports hit with an import levy.

The EU’s Foreign Affairs chief Josep Borrell on Friday said China’s “announcement could be a tipping point in the global fight against climate change.”

“The simple fact that China acknowledges the dramatic threat of climate change and that we need more action is of paramount importance,” he said.

Eryk Bagshaw is the China correspondent for The Sydney Morning Herald and The Age. Due to travel restrictions, he is currently based in Canberra.

Nick O’Malley is National Environment and Climate Editor for The Sydney Morning Herald and The Age. He is also a senior writer and a former US correspondent.

Mike is the climate and energy correspondent for The Age and The Sydney Morning Herald.