This summer, International Trade Secretary Liz Truss announced Britain would press ahead with a bid to join a major trade tie-up between countries including Canada, Australia and New Zealand after leaving the EU. Ms Truss said the Comprehensive and Progressive Agreement for Trans-Pacific Partnership (CPTPP) was the “next logical step” for post-Brexit Britain. The CPTPP is a high-quality free trade agreement which binds together Australia, New Zealand, Canada, Japan, Singapore, Vietnam, Mexico, Malaysia, Peru, Chile and Brunei.

Becoming a member of the CTPPP could also diminish China’s growing influence in Asia, particularly if the US decides to join, too. 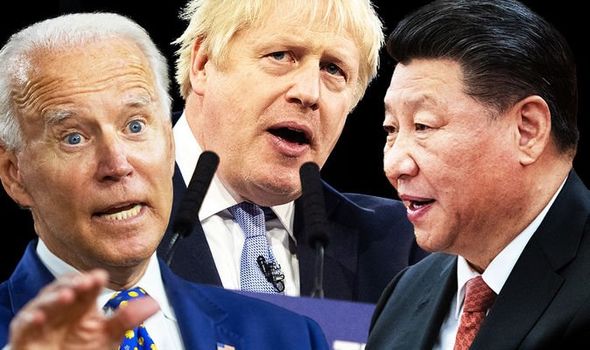 The Trans-Pacific Partnership was the centrepiece of President Barack Obama’s strategic pivot to Asia.

Before President Donald Trump withdrew the United States in 2017 – on his third day in office – the TPP was set to become the world’s largest free trade deal, covering 40 percent of the global economy.

Mr Trump suggested in early 2018 that he would be willing to reenter TPP discussions under certain conditions, but he quickly backtracked.

In an exclusive interview with Express.co.uk, Jonathan Aronson, a trade expert and Professor in the Department of Political Science and International Relations at USC Dornsife, claimed it was a “terrible mistake” for Mr Trump to withdraw from the partnership.

Professor Aronson argued that by joining the TPP, the US President could have taken on China’s unfair trade practices and secure America’s economic role in Asia.

JUST IN: Donald Trump’s plan to assert control regardless of result exposed

He said: “I was a big supporter of the TPP.

“Trump pulled out and it was a terrible mistake because it empowered China.”

However, things might change now that former Vice President Biden is within touching distance of victory over Mr Trump in the US election.

Prof Aronson added: “I think there might be an effort to rejoin in the future if Joe Biden wins the election.

“However, it will not be a year one priority.”

He argued that the US would be extremely keen to join, particularly if Britain was in the partnership.

He said: “I think Biden would be open to bringing Washington closer to CPTPP – he won’t admit it now but I think he would.”

Ties between China and the US reached their lowest point in decades this month, signalling what experts in both countries believe is the clear direction for one of the most important bilateral relationships in the world.

Under the Trump administration, the US has put sanctions on Chinese officials over human rights issues in Xinjiang and Hong Kong while also increasing engagement with Taiwan, including arms sales.

A trade deal to end a protracted tariff war has stalled and the US has placed more restrictions on Chinese state media.

In late July, Prime Minister Boris Johnson performed a U-turn and announced that Huawei products would be banned from the UK and all products currently existing will have to be removed from Britain’s infrastructure by 2027.

Were both Britain and the US to join the CPTPP, the two could arguably form a coalition of “strength” against Beijing.