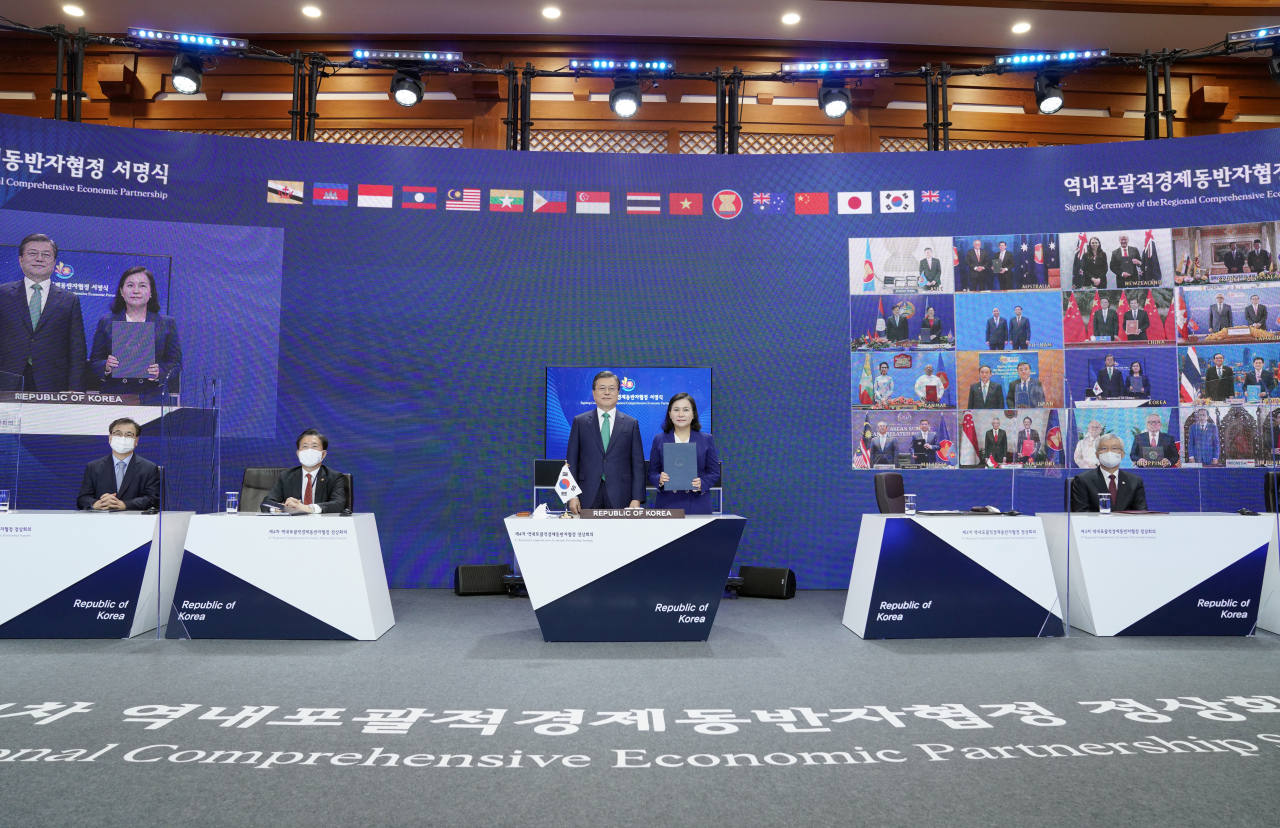 Cheong Wa Dae downplayed speculations Sunday that the US could press South Korea into joining the Comprehensive and Progressive Trans-Pacific Partnership, or CPTPP, as a balancing measure between China and the US.

Such speculations are being fanned by the signing of the Regional Comprehensive Economic Partnership or RCEP on Sunday. The deal creates one of the world’s largest free trade blocs, with the noticeable absence of the US. RCEP spans the 10 Association of Southeast Asian nations, Korea, Australia, China, Japan and New Zealand.

The CPTPP in comparison, includes Australia, Brunei, Canada, Chile, Japan, Malaysia, Mexico, New Zealand, Peru, Singapore, and Vietnam. Although the CPTPP is based on the Trans-Pacific Partnership, or TPP, which was led by the US under the Obama administration, the US is not part of the deal, with US President Donald Trump having pulled out in early 2017.

South Korea remained out of TPP negotiations, having established bilateral free trade agreements with nine of the countries that ultimately signed the CPTPP — with the exception of Japan and Mexico — by 2015.

While RCEP is on the surface led by the ASEAN, the presence of China – whose exclusion from TPP was seen as a politically motivated move – has led to assessments that the deal will increase Beijing’s influence on international trade.

With the concerns rising that the US’ absence from RCEP may be detrimental to the US position in international trade, and US President-elect Joe Biden having played a part in TPP’s creation as vice president of the Obama administration, some are predicting that Biden will push to rejoin the trans-Pacific deal, which in turn will generate pressure for Seoul to join the CPTPP.

Biden’s stance on the issue, however, remains unclear. The US president-elect has not commented on the issue directly, but during a Democratic primary debate in 2019, Biden said that he is opposed to rejoining the partnership as it is, and that parts of the deal will need to be renegotiated for the US to rejoin.

With Biden’s views unknown, Seoul is taking a cautious approach to the issue.

“President-elect Biden hasn’t said (if the US will) take part in CPTPP or not. Joining the CPTPP could be possible if necessary, but this is not the time to make the decision,” a high-level Cheong Wa Dae official said on Sunday, after the RCEP was signed.

“The relationship between the RCEP and CPTTP is not one of conflict or competition, but complementary. Both pacts aim for trade multilateralism in the Asia Pacific region,” the official added.

The official stressed that Seoul’s principle of expanding “free trade order based on multilateralism” is the reason for Korea’s participation in RCEP, and that conflict between China and the US is not a factor.