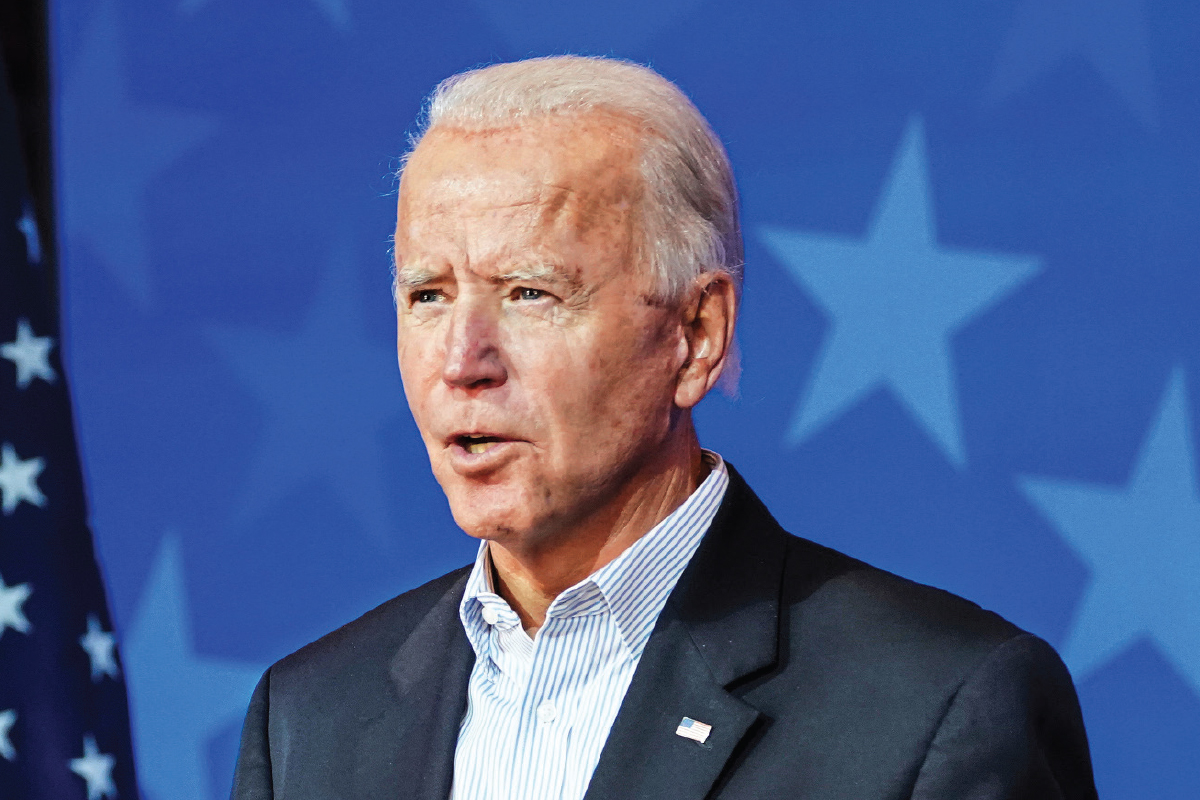 AT press time, the results of the 2020 US presidential election were yet to be finalised but the odds seemed to be in favour of Democratic Party candidate Joe Biden, who had 253 electoral votes — 17 short of the 270 needed for a win — and was leading in Pennsylvania, Georgia, Arizona and Nevada.

A Biden presidency would see the White House returning to the Democrats after four years but Congress will continue to remain split — the Senate or upper house is likely to be still controlled by the Republican Party while the Democrats will retain a majority in the lower house, the House of Representatives.

If Biden is inaugurated as the 46th president of the US on Jan 20 next year, it will definitely signal a win for global trade, as he is more receptive to working with other countries than current US President Donald Trump is.

However, this does not necessarily mean that the Biden administration is ready to bury the hatchet with China, experts say.

“On a broad level, the antipathy towards China is colour-blind; whether the president is red or blue, there has been a hardening of attitude towards China in general. Hence, even under a Biden presidency, tensions with China, including on the trade front, are likely to continue,” says OCBC Bank economist Wellian Wiranto.

Throughout the course of the trade war, which started in 2018, the US has imposed tariffs on Chinese products worth US$550 billion, and China in retaliation has slapped tariffs on US$185 billion worth of US goods. The two superpowers came to a “Phase One” trade deal that was signed in January, which saw the US cut some of its tariffs on Chinese goods in exchange for China pledging to buy more American farm, energy and manufactured goods.

Wiranto opines that what may be different for the US-China relationship under a Biden administration is the approach taken.

“Biden is likely to pursue a more by-the-book approach rather than the erratic tactics pursued by Trump. On that basis, it is probably a net positive for global trade,” he says.

“[Trump’s action] had a significant impact on the global supply chain in relation to Asia-Pacific in the form of reshoring and onshoring. The impact of reshoring hasn’t even been [felt] throughout Asean, with Vietnam as the main beneficiary. Malaysia has benefited to an extent, but not as much as expected.

Rais adds that the decoupling seen in the technology sector as a result of the trade war would also be reversed by a Biden presidency.

“[An easing of the] trade war between the US and China under Biden would also lead to better and more improved bilateral relations between the two countries — which would be beneficial to the wider supply chain networks, particularly for Malaysia and Asean,” he says.

Stephen Olson, a research fellow at the Hinrich Foundation and a former international trade negotiator who had served on the US team for the North American Free Trade Agreement (Nafta) negotiations, says a newly elected Biden will immediately face three questions with regard to relations with China: What to do with the punitive tariffs put in place by his predecessor, what to do with the Phase One agreement and how to move forward more broadly on trade with China?

“[We can] expect the tariffs and the Phase One deal to remain in place, at least initially. Given all the tough talk on China during the campaign, there is no political cover to abruptly ease off on the tariffs — and even less substantive reason to do so, given the implementation shortcomings.

“Terminating the agreement, however, would unnecessarily antagonise the relationship, with little apparent gain. And assuming the Chinese economy continues its strong recovery, the pace of Chinese purchases should be ramping up by the time Biden is sworn in — all the more reason to keep Phase One in place,” Olson says in a note.

Over the longer term, Olson is of the view that Biden will essentially pursue the same list of grievances as his predecessor, but unlike Trump, he will attempt to construct a united front in close coordination with the European Union, Japan, Australia and other like-minded countries.

“Where and when possible, Biden would be more inclined to work through World Trade Organization channels. Ultimately, Biden’s approach could be more challenging for Beijing,” he says.

Should the Biden administration implement a large stimulus package that boosts the US economy and without the protectionist policies from the Trump administration at play, this could lift the performance of economies on this side of the world.

“Given his likely steadier approach and likelihood to engage policy experts in their field, including in the administration’s policy towards Asia, we would probably benefit from higher-level engagements.

“On the stimulus front for the US, given the lower likelihood now of a Democrat-controlled Senate, the potential for a big fiscal package is more muted. In that respect, any boost to Asean exports from that will be more curbed,” says OCBC’s Wiranto.

A revival of the TPP?

There is also the possibility of the revival of the Trans-Pacific Partnership under the Biden administration. On the third day after being sworn in as president, Trump signed an order withdrawing the US from the TPP, a trade agreement that was the brainchild of former US president Barack Obama, and which Malaysia was also part of.

After the US’ withdrawal, the Comprehensive and Progressive Agreement for Trans-Pacific Partnership (CPTPP), a free trade agreement between Canada and 10 countries in Asia-Pacific — Australia, Brunei, Chile, Japan, Malaysia, Mexico, New Zealand, Peru, Singapore and Vietnam — came into play.

“Although Biden will consider a US re-entry into the accord, nothing will happen soon. Major trade initiatives are simply not that high on his agenda.

“And in any case, it would require the existing 11 members to accommodate US concerns, especially on protections for US workers. There would be some appetite to do so, but it is not unlimited,” says Hinrich’s Olson.

Wiranto concurs. “Biden has expressed some openness towards rejoining the TPP, albeit with renegotiated terms, including on workers’ protection to pay heed to the progressive elements within his Democratic Party. It is probably not going to be a priority agenda for him at this point, given the more immediate pressing needs such as curbing the outbreak and reviving the economy,” he says.

EMIR Research’s Rais opines that a Biden administration could well pave the way for China to negotiate for entry into the CPTPP and for the US to return.

“Given his history of supporting free trade agreements such as Nafta, Biden would almost certainly support the US membership of the [current] CPTPP. What would be new under Biden could well be the green energy sector — that might result in a new era of US-Sino cooperation in this area since the latter is also a pioneer in renewable technology,” he says.

The impact on the US dollar

Beyond the immediate horizon, there is actually very little correlation between a Democratic president and a weaker US dollar, says Terence Wu, FX strategist at OCBC Bank.

“For as long as the market is still focused on the US, we think the prospects for the US dollar tilt negative. The likely split Congress and Biden presidency imply that there may still be some foot-dragging when it comes to fiscal stimulus, and when it eventually passes, the scale of the stimulus may be limited. This means that we are unlikely to have a large, far-reaching stimulus package that may sustain growth in the US beyond pandemic survival, and this is a US dollar negative.

“Equities have taken a glass half-full approach to the situation — this suggests that overall risk sentiment may stay largely supported, leaving little demand for the US dollar as a haven currency,” he adds.

Biden has already made his mark in US history by garnering more votes than any other presidential candidate, but the question remains whether that will be enough to guarantee him the presidency, and that, too, without legal objections from the Trump administration.

For the rest of the world, an additional question remains: Will a  Biden administration choose to restore the globalisation agenda, which was practically absent in the Trump administration, or continue with the inward-looking policies of its predecessor?