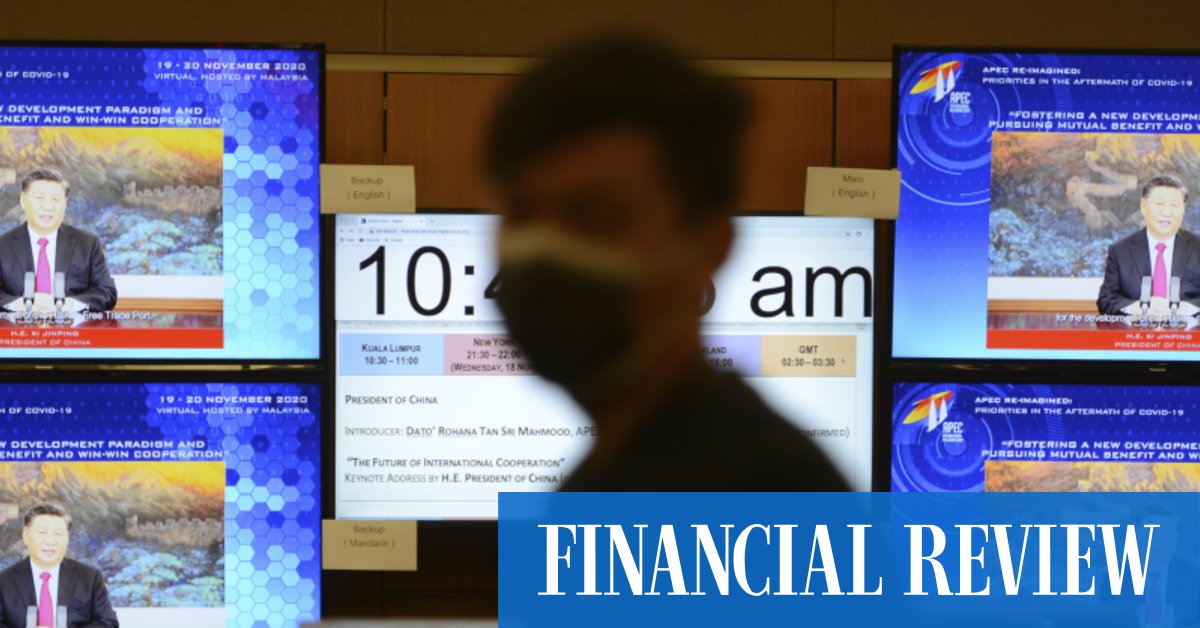 Trump last participated in the APEC forum in 2017 and last weekend skipped the East Asia Summits, also held online. Trump, or his representative, was initially due to speak to the CEOs Friday morning but that was canceled, with no reasons given.

New Zealand Prime Minister Jacinda Ardern, who spoke to the CEOs after Suga, voiced hope that APEC leaders will agree at their meeting on new development goals for the next 20 years that focus on free trade, digital innovation, and sustainability and inclusion.

“As we confront this generation’s biggest economic challenge, we must not repeat the mistakes of history by retreating into protectionism. APEC must continue to commit to keeping markets open and trade flowing,” she said.

“We will not reverse course or run against historical trend by ‘decoupling’ or forming a small circle to keep others out,” Xi said.

“We will not reverse course or run against historical trend by ‘decoupling’ or forming a small circle to keep others out,” Xi said at a forum ahead of the APEC leaders’ meeting to be held virtually in Kuala Lumpur on Friday night.

“China will remain committed to openness and cooperation, and adhere to multilateralism and the principle of extensive consultation, joint contribution and shared benefits.”

Xi said “mounting unilateralism, protectionism and bullying as well as backlash against economic globalisation” had added to risks and uncertainties in the world economy.

Singapore Prime Minister Lee Hsien Loong told the APEC forum he expected “more multilateralists” in the Biden administration with more support for the bloc and the WTO.

“I am not sure that they will be more keen on throwing the doors wide open, or joining the CPTPP, because that depends on domestic politics too,” he said, referring to the successor to the Trans-Pacific Partnership (TPP) trade pact.

Trump’s “America First” approach saw the United States withdrawing from the TPP in 2017. It has since changed its name to the Comprehensive and Progressive Agreement for Trans-Pacific Partnership (CPTPP).

The United States is also absent from the world’s largest free-trade bloc, the Regional Comprehensive Partnership Agreement (RCEP) – a 15-nation pact backed by China that was signed last week.

Trudeau said Canada was closely watching the RCEP deal, which he said was going to be a game changer in Asia, to see how China behaves as part of the trade deal.

He also reiterated Canada’s disappointment with China for detaining two of its citizens after Huawei’s chief financial officer was arrested in Canada on a US warrant almost two years ago. He asked countries to stand up against China’s “coercive diplomacy”.

The APEC meeting on Friday will be the first in two years after last year’s summit in Chile was cancelled due to violent protests. At the last meeting in 2018, the countries failed to agree on a joint communique, the first time in the bloc’s history, as the United States and China stood at opposing ends of talks on trade and investments.