Hello from Brussels. Top scoop by my colleagues here who have got hold of a European Commission strategy paper on repairing relations with the US under the Biden administration. One conclusion is that tech is one of the biggest areas where convergence is needed. True enough: if EU governments push forward with the digital services tax, the row is going to blow up again pretty quickly. Also, we know we sound like a broken record (or some more modern form of audio playing on loop) but as long as the EU can’t get it together to discuss data regulation beyond just saying that everyone should CTRL-C CTRL-V the General Data Protection Regulation, there’s going to be a problem with building a tech alliance with the US. Also: Huawei and 5G, which we’ll come back to.

Today’s main piece is on how the controversy over companies suing governments using investor-state dispute settlement is coming back in a new and politically sensitive area — renewable energy. Tit for tat is with John Springford of the Centre for European Reform, while our Chart of the day is on the recovery in global trade.

Don’t forget to click here if you’d like to receive Trade Secrets every Monday to Thursday. And we want to hear from you. Send any thoughts to [email protected] or email me at [email protected]

Seldom can an abbreviation have become as notorious as quickly as “ISDS”. Former EU trade commissioner Cecilia Malmstrom observed that at the beginning of her term in 2014, the first Google hit for ISDS returned the International Sheep Dog Society (www.isds.org.uk if that’s your thing). Within a few years there were thousands of people on the streets of Berlin — and several hundred in the hospital car parks of Britain — demonstrating against the alleged threat that the investor-state dispute settlement in the EU-Canada trade deal posed to public services.

Brussels got a major placate-and-reform operation under way, which aimed to make investor-state tribunals look more like public courts. It seems to have succeeded in drawing much of the poison from the issue in the EU, and has informed more general discussions about reforming ISDS. Those talks are grinding their slow and bureaucratic way through Uncitral, the UN body where such things are debated (if you want to follow this, hook yourself up to the excellent European Journal of International Law blog, particularly these two authors).

In the meantime, the investor-state controversy has popped up with more immediacy in another place, the Energy Charter Treaty. The treaty is an international investment agreement with binding dispute settlement to which the EU centrally and nearly all its member states individually are signatories. The original aim of the ECT, which dates to 1994, was to integrate the resource-rich former Soviet Union and central and eastern Europe into western European and world energy markets. The idea, essentially, was to substitute international treaty law for the, ahem, “unreliable” national legal systems of the countries involved. Its most famous case was when shareholders of the former oil and gas giant Yukos won a $50bn settlement against Russia for expropriating their investments, an action that continues to rumble on.

But the ECT is now intervening substantially — and expensively — in the renewable energy policies of western European governments. Going back more than a decade, EU countries have been sued by energy companies claiming expropriation of their property and violations of “fair and equitable treatment” for the way those countries phased out fossil fuels and nuclear power without satisfactory compensation. More recently, Spain in particular has been hit by a new wave of claims from generating companies after it cut back generous official incentives to supply green energy.

Nord Stream 2 has brought an ECT case against the EU, arguing that new European gas regulations damage the profitability of the gas pipeline project © Alex Kraus/Bloomberg

Meanwhile, Nord Stream 2, a Russian company majority-owned by Gazprom that is building the controversial eponymous gas pipeline to Germany, has brought an ECT case against the EU, arguing that new European gas regulations damage the profitability of the project. It could well launch another against Germany if Berlin accedes to pressure and cancels the pipeline (the irony of the original aim of the ECT being turned on its head, with Russian companies suing western governments, is not lost on the latter).

The rush of litigation under the ECT feels a bit like the Philip Morris-Australia case on plain packaging of cigarettes, which did so much to give ISDS a bad name internationally. An expanding and politically sensitive area of government policy (public health in the Australia case, renewable generation and energy security in this) butts up against an arbitration system from an earlier era with what critics say is a broad definition of what constitutes expropriation.

The political backlash is getting serious. Environmental campaigners are concentrating their fire on the ECT. European governments are frothing about sovereignty. Members of the European Parliament are calling on the EU to pull out. Italy left the ECT in 2016, though the treaty’s provisions are still binding on departing members for 20 years.

Many governments increasingly seem to believe that ISDS is expendable in part or altogether if it becomes politically toxic. Governments have sometimes restrained dispute settlement systems with strict procedural rules, as has the EU. Or they have negotiated partial or total carve-outs, as New Zealand has with several partner countries in the CPTPP. Or they may not sign an ISDS agreement at all, as with the EU in its recent bilateral with Japan.

The ECT’s governments are negotiating reform of the treaty to reduce its reach, but some prominent countries, particularly Japan, are resisting. Some ISDS experts say the ECT secretariat, which like its World Trade Organization counterpart has a fair amount of influence in framing the debate, is unhelpfully resistant to change.

That may prove a dangerous tactic. Inflexibility might well prove the ECT’s downfall. If the ECT cannot bend to the new reality of huge investment and shifting regulations in green energy, it may well break.

Global trade continued its dramatic recovery over the summer months. The question now is whether that continued throughout October and November, when European governments have imposed stringent lockdowns to contain a second wave of the pandemic. It may well do. While restaurants and cultural venues have shut, manufacturers — which rely far more on global trade — have remained open for business here and elsewhere. 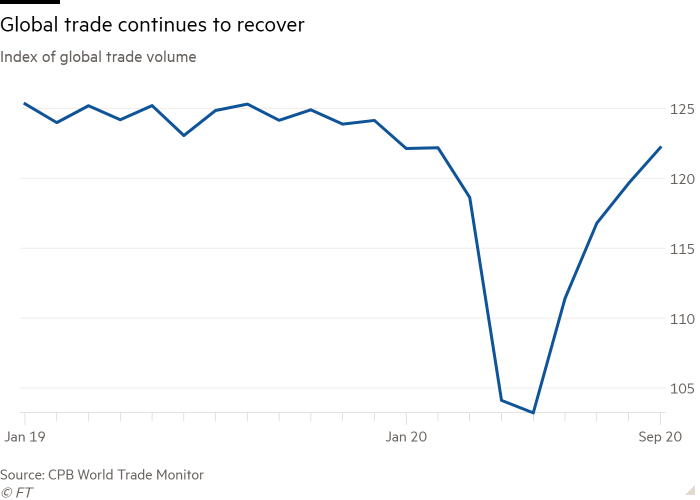 John Springford, deputy director of the Centre for European Reform think-tank in London, joins us to answer three quick questions.

Will it actually make much difference whether the UK and EU reach a Brexit deal or not?

A free trade agreement (FTA) is so disappointing compared with the single market that it’s tempting not to care. But if an FTA means the economy is 5 per cent smaller, and no deal means 7 per cent, take the deal. And more importantly, the Northern Ireland-Great Britain border will be harder if there is no deal, because tariffs will be applied to some British goods coming into Northern Ireland, if there’s a risk they could be re-exported to Ireland. That is, unless Boris Johnson or a successor decides to rip up the protocol in part or entirely, forcing Ireland to erect a land border. No deal could thus destabilise Northern Ireland, and it’s vital to avoid that.

Does the EU’s new strategy of ‘open strategic autonomy’ make any sense?

It could make sense. The member states could cede more power over immigration, corporation tax, and the regulation of capital, services and digital markets to EU institutions. That would make Anu Bradford’s “Brussels effect” more powerful, because the EU’s market would be more integrated and its rulemaking more extensive. And if global companies followed more EU standards and other countries copied its rules, the bloc could be more confident about opening its market. But, as the slow progress towards a capital markets union shows, it’s not apparent that the member states prioritise such “geoeconomic” power over the right to regulate their own markets.

How will Covid change the way the EU is governed?

Covid has strengthened the EU by reinforcing the case for orthodox macroeconomics. Government borrowing costs are now at record lows, thanks to the European Central Bank intervening in sovereign debt markets. German conservatives have gone quiet about that. The League had a chance to try to take Italy out of the euro and balked, and now eurozone policy is less damaging to Italy’s interests. The recovery fund is very likely to go ahead, with a stronger rule of law mechanism to constrain would-be autocrats in Poland and Hungary. Over time, thanks to Brexit, life may become more uncomfortable for euro “outs”, forcing them to choose between influence over the EU project or maintaining their own currency.