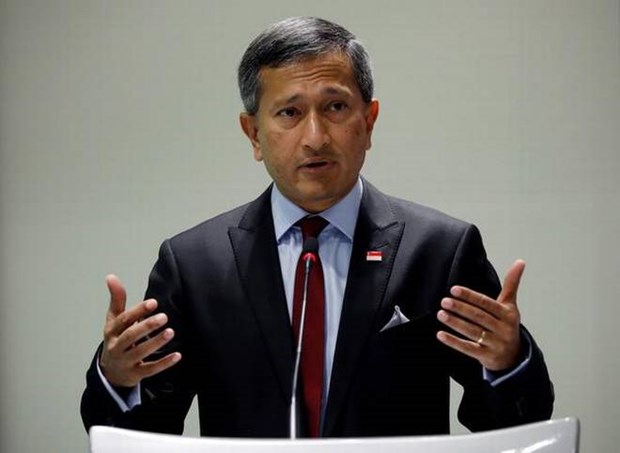 New Delhi (VNA) – Singapore’s Foreign Minister Vivian Balakrishnan has said that he hopes India will “reassess” its stand on regional trading agreements such as the Regional Comprehensive Economic Partnership (RCEP) pact that it withdrew from, “The Hindu” of India reported in April 14.

According to The Hindu, the Singaporean Minister also emphasised the crucial role played by New Delhi in the region at a time of increasing global instability.

Addressing the Raisina Dialogue 2021, held virtually by the Observer Research Foundation in partnership with India’s Ministry of External Affairs, Balakrishnan said he hopes India will reassess regional trade pacts like RCEP and even the Comprehensive and Progressive Agreement for Trans-Pacific Partnership (CPTPP).

“These trade pacts will give Indian companies a platform to showcase their strengths across even larger markets”, he noted.

The RCEP came into force in November 2020 and is the world’s largest trading agreement, covering the 10 ASEAN member nations, China, Japan, the Republic of  Korea, Australia and New Zealand. Meanwhile, the CPTPP, the successor of the Trans-Pacific Partnership (TPP), groups  Singapore, Brunei, Malaysia and Vietnam from ASEAN along with Australia, New Zealand, Japan, Canada, Mexico, Chile and Peru.

India withdrew from the RCEP largely because of concerns that it would open up India to Chinese goods, amid an already wide trade imbalance with China.

Balakrishnan said Singapore hopes India could help build a regional architecture that is “open” and “inclusive”.

He also praised India’s strong support for global vaccine cooperation, at a time when the pandemic had “turbocharged protectionism and nationalism all over the world, significantly disrupted trade flows and supply chains”./.